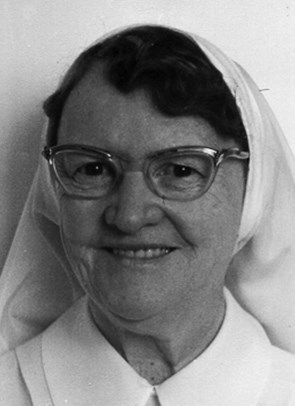 Mary Monica Gallagher was born in Abermain on the 20 October, 1914.  Her parents were Peter Gallagher who worked as a wheelwright in the mines and Mary Garaty who died giving birth to Mary, their only child.  Mary was raised lovingly by the Laverty family who always treated her as their own and with whom she forged close family ties.

On 12 June, 1931 Mary entered the novitiate at Lochinvar and took the name of Sister Mary Josephine of Our Lady of the Sacred Heart.  Profession followed on the 3 January, 1934 and then she began her long and distinguished life of service in the ministry of music and pastoral care.

Sister Josephine gained her A. Mus.A and L.Mus.A. and while teaching music at Lochinvar, won a scholarship to the London Conservatorium. While still in the Novitiate a teacher had come from the Conservatorium to Lochinvar to teach Sister Josephine and her fellow novice, Sister Mary Justine to play the newly-installed pipe organ. She excelled in music teaching and many fine musicians thank her for the grounding she gave them.

Her appointments were many: Krambach, Aberdeen, Denman, Wauchope, Largs, Lochinvar, Kendall, Taree, Windale, Bulahdelah, Belmont, Ayr in north Queensland, Charlestown, Gloucester, The Junction, Shortland, Merewether Beach, Port Macquarie and Swansea. Above all, she cherished her gift for playing the piano and organ and was always happy to use it for the benefit of the parishes and for any organisation that needed an accomplished accompanist.  Sister Josephine formed lasting friendships with the people of the parishes in which she served and many of them kept in touch with her till her last days.

In her later years, it was a joy for her to share music with the aged and infirm as she realised how much a sing-song lifted up the heart.  As her own age increased, Sister Josephine retired first to Swansea and then to Lochinvar where she was at home till 2009.  At that time she needed extra care and this was provided at St Joseph’s Home in Sandgate where she died peacefully on the evening of 22 August 2011.

After the celebration of her Funeral Mass in the convent chapel Sister Mary Josephine Gallagher was laid to rest in the Sisters’ section of the Lochinvar cemetery.