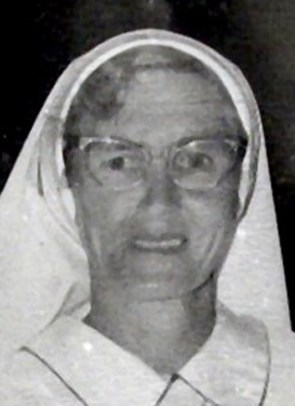 Margaret Joan Pearson was born at Wingham on the North Coast of New South Wales on 30 November 1922 to Harold John Pearson and Myra Pearl Cann. Her early life was spent at Wingham where she attended both the Primary and the Junior Secondary Schools conducted by the Sisters of St Joseph, Lochinvar.

Margaret entered the Novitiate at Lochinvar on 2 February 1939 taking Sister Mary Jude of the Purification as her religious name. She took her first Vows on 7 January 1942. After completing her secondary studies and doing her teacher training at Lochinvar she taught in many of our primary schools on the coalfields at Cessnock, Abermain, West Wallsend and at Shortland and Charlestown. She also taught at Port Macquarie and Merriwa.

It was when she was Principal of the school at Cessnock in 1956 that she first showed signs of Reynaud’s Disease, a vascular condition which made her hypersensitive to cold.  It was a severe disease of the blood vessels which impaired circulation and made gangrene a real threat. She was to suffer from this for the rest of her life. This disease necessitated living in the tropics during the cold months, separated from her religious community and family. So from 1956 on Sister had to spend her winters in Queensland. There she taught with both the Mercy Sisters and the Good Samaritans in such places as Home Hill, Giru, Cranbrook, Bowen, Proserpine and Winton.

A community of our Sisters was established at Parkside in 1962 where she was superior of the community 1970-73. Unfortunately in 1973 the Sisters were withdrawn from Parkside due to lack of personnel.  Sr M. Jude always retained a great love of the Parkside people and used try to visit as many of the families there as possible before her return trips to New South Wales.

In 1985 she taught at Home Hill, a town on the opposite side of the Burdekin River to Ayr. So Parkside people saw her more frequently than before. On the day before she left North Queensland for the last time she visited twenty-two homes of Parkside parishioners. It was to say her usual farewells to the people before leaving for the summer months in NSW. No one realised they were to be her final farewells.

It was on the last leg of her journey home that the tragic accident happened. On the morning of 19th December Sr M. Jude and her companion, Sr Helen Brooks of the Taree community, left Taree for Newcastle where both Sisters were to visit their families. Near Nabiac a car pulling a caravan veered out of control and swerved across the road hitting the car in which the Sisters were travelling. Both Sisters were killed as also were the elderly couple in the other car. The news of this accident was a great shock to the Congregation and her family.

The double Requiem for Sisters Jude and Helen was at 10.30 a.m. on Saturday 21st December. About 50 priests were present at the Requiem as was Sr. Jude's mother and brothers and sisters and their families. Sister was laid to rest in the Sisters' section of the Lochinvar cemetery.