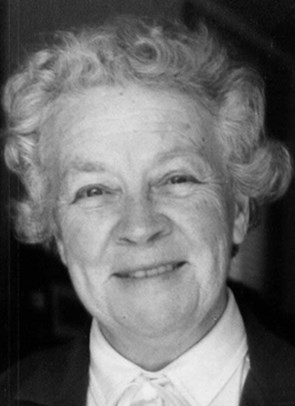 Aileen Cecilia Fallins was born on 13 April 1913 at Adamstown. Her parents were Patrick Fallins, a worker in the mines at Abermain and Burwood and Catherine Hill.  Aileen was one of five children born to Patrick and Catherine.  In the family there were Kathleen and Mary who both became Sisters of St Joseph and Vincent and Darcy.

The family lived in Abermain but when it was time to commence school Aileen went to live with her aunt, Mrs Hill in Adamstown and attended the Catholic Primary School there.  After completing her primary education she went to St Aloysius’ Secondary School at Hamilton for one year before going to St Joseph's Boarding School at Lochinvar to complete her Secondary School studies. She took music lessons in piano and violin and soon became a very talented musician, swelling the ranks of the Lochinvar Secondary School orchestra and revelling in its performances. She was known to be very generous and helpful to anyone who had difficulties with theory or any other aspect of music.

Having finished her schooling Aileen entered the Novitiate at Lochinvar on 3 June, 1932, was given the name Sister Mary Justine and was professed on 2 July, 1935. She then began her apostolate as a music teacher in the school as well as giving private music lessons. In 1933 she with Sister Josephine were given the opportunity to learn to play the new pipe organ. A teacher from the Conservatorium came to Lochinvar to teach them and both passed two examinations with high marks.

Sister Mary Justine taught in many schools in the Maitland Diocese during her teaching career.  Convents in which she lived and taught were Lochinvar, Merriwa, Taree, Merewether, Dungog, Denman, Muswellbrook, Kurri Kurri, Charlestown, Summer Hill (Sydney Archdiocese), Kilaben Bay and Swansea. Whilst in Taree she formed a stringed orchestra which was available for special occasions such as St Patrick's Day Concerts, St Joseph's Day celebrations, school concerts and many other celebrations.

She was a very happy, generous person and gave much joy to many people whom she loved to visit. It was during her visits to parishioners and friends that she would stroll in their gardens, always taking home some cuttings to beautify her own home garden as she loved flowers.

In 1987 Sister Mary Justine retired from teaching and spent some years doing pastoral work. She loved to visit the sick and elderly and accompany the Sisters as they took Holy Communion to the people confined to their homes. She became a member of the Swansea Senior Citizens’ Club, enjoying the company of the elderly and joining in sing-a-longs and other activities, occasionally playing a tune for them.

As her health failed, she could no longer enjoy these things and she returned to Lochinvar to take up residence in the Nursing Home in 1998. Her love and gentleness was much admired by those who cared for her.  In 2001 when the Lochinvar Nursing Home was closed, Sister Mary Justine was moved to the Mercy Nursing Home at Singleton where she passed away on 17 August, 2002.  Sister was surrounded by the Sisters of her own congregation at the time of her death. On 19 August the Requiem Mass was celebrated by Father Jim Saunders and other priests.  A large congregation of Sisters of St Joseph and friends joined in praying for Sister Mary Justine at the Mass celebrated in the convent chapel and then at the Sisters' section in the Lochinvar Cemetery where she was buried immediately after the Mass.