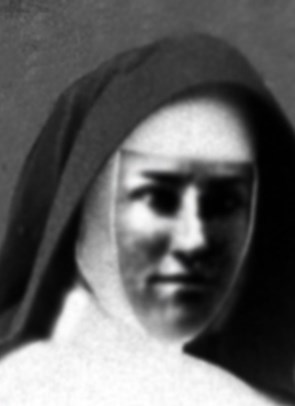 Sister M. Leo, formerly Mary Hogan, only daughter of Timothy Hogan and Mary Cooper of Muswellbrook, was born on 10 February 1885 and educated by the Sisters of Mercy there. In both home and school she received the training which formed the seed of her future religious vocation.

On 1st January, 1901, she entered at Lochinvar, and was professed in July, 1903 as Sr M Leo of the Divine Infant. Her long life was dedicated to God in the many schools: Glendonbrook, Burwood, Krambach, Dungog, Carrington, West Wallsend, Cessnock, Wauchope, Port Macquarie, Denman, Swansea and Wingen.

She loved and cherished her Josephite rule of life and was a humble, peace-loving person who, longing to do good deeds for others, served God through the ministry of her neighbour.

Sr M Leo died in Lochinvar Infirmary after a short illness. She was at Mass and Holy Communion on Thursday morning 27th, and about 8 a.m. had a heart seizure and stroke. She died on Friday, 28th October, 1955, fortified by the rites of the Church

The interment took place the following day after Solemn Requiem Mass and Office in the Convent Chapel on Saturday 29th October. His Lordship, Most Rev. J. Toohey, D.D., Coadjutor Bishop of Maitland, presided in the Sanctuary and officiated at the graveside. The Celebrant of the Mass was Rev. B. McCosker (a relative of the deceased Sister), with Rev. J. Quinn and Rev. J. Newton as Deacon and Sub-deacon respectively, and Rev. J. Delaney as Master of Ceremonies. The Cantors were Rev. P. Purcell and Rev. J. P. Lavery. The pall-bearers were Messrs. Per­kins, Howell, Cormack and Knipe.