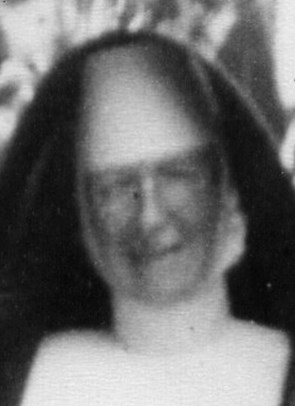 Cecilia Rose Mulville, the third daughter of Charles Patrick Mulville and Mary Lynch was born in Petersham in 1906. Since her father was a postmaster, their place of residence was frequently changed and after leaving Petersham, he was transferred to Dungog, Stroud and later to Carrington where the family resided until his retirement in New Lambton.

After profession on 28 August 1926 as Sr M Lucina of the Infant Jesus, she was appointed to various convents in the diocese: Cundletown, Port Macquarie, Denman, Aberdeen and Wingen.  Her special work was the preparation of little children for their first Holy Communion.

Prior to the illness which brought about her untimely death, Sister Lucina was engaged with the Infants' Classes at the Greta Migrant Centre where she brought the knowledge and love of God to those young souls. The work here was not easy and the difficulties Sister faced in this portion of the Lord's vineyard were a fitting preparation for the painful illness she endured with wonderful resignation to God's will. God in His mercy gave her timely warning of her end and she used this time profitably for eternity, purifying her suffering by uniting it with that of her Divine Master.

Sister’s death occurred at the Mater Misericordiae Hospital at Waratah on Thursday, 10th December 1959. The obsequies took place at Lochinvar on Saturday, 12th December. His Lordship Most Rev. John Toohey, D.D. Bishop of Maitland presided in the sanctuary and a choir of twenty-seven priests of the diocese chanted the Office and Requiem Mass. There were present also the relatives and friends of the deceased including her aged mother and brothers and sisters. The celebrant of the Mass was Rev. Father Casey of New Lambton and Rev. Fathers Coffey and Campbell were Deacon and Sub-deacon and Rev. Father McCosker was Master of Ceremonies. The Cantors were the Reverend G. Flatley and J. Delaney.

The interment took place after the Mass in the Lochinvar cemetery, the Bishop and Clergy leading the cortege and the Sisters and relatives following the bier. The pall bearers were Messrs W. McFadyon, G. Knipe, L. Killan and J. Connolly.