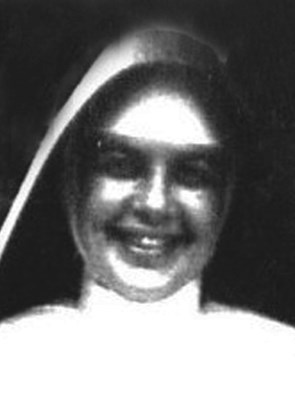 Before entering, Gertrude had applied for a job as a typist with shorthand in Taree at Mr Cowan's Solicitors Office and was accepted but decided that she would enter at Lochinvar instead. Her parents accepted her decision and took her to Lochinvar (when pneumonic plague was raging) on 19 June, 1919. They travelled by train which was a risk in those days due to the plague.

On 5th January, 1922, she was professed and went out to begin long and successful years as a teacher of Primary School classes. Her first appointment was Cessnock where she stayed from 1922 to 1939. During that time, on the recommendation of Kevin Ryan, Inspector of Schools, she was made Principal and served the next thirty years at Cessnock, Lochinvar, Merewether, Aberdeen and Abermain.

Sister was appointed to the Primary School Board set up by the Congregation to assist the Sisters in achieving excellence in the schools through testing. Her dealings with the Sisters in testing and teaching was always one of great compassion and understanding for the young teacher. She was a most earnest senior primary teacher and during her time as Principal many of her pupils gained a Bishop's Bursary or State Bursary.

Illness was also part of Sr  Magdalen’s  life but her teaching ministry was her first priority so she tried not to let this interfere with the children’s learning. One of her favourite Gospel stories was Mary Magdalen at the feet of Jesus when she washed his feet with her tears. She never tired of saying "Jesus meek and humble of heart make my heart like unto thine”.

Sister Magdalen Brimstone retired to the Nursing Home at Lochinvar and after a long residency, died there on 23rd December, 1993 after seventy-four years in Religion and in the ninety-third year of her life.  She is buried in the Sisters' Cemetery at Lochinvar.