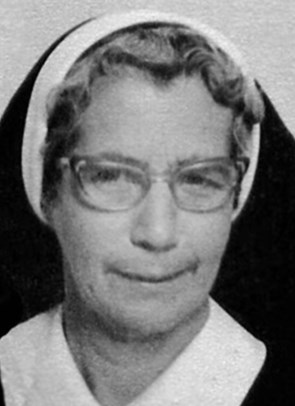 Mary Monica Campbell was born on the 4th May, 1918 to William Thomas Campbell and Margaret Carmody. At the time of her birth the family was living in the Newcastle area and Mary was born at Hamilton. She had three sisters, Patricia, Joanne and Margaret and two brothers, Michael and Harold who became a priest in the Maitland Diocese

Mary entered the Novitiate in Lochinvar on 2 February 1936 and was given the name of Sister Mary Majella of Our Lady of Perpetual Succour. In 1938/39 Sister completed her teacher training and was Professed in 1939.  She taught at Cessnock, Dungog, Carrington, Abermain, Taree, Merewether, Swansea, Port Macquarie, Clifton Gardens and Kurri Kurri, in some of these on two occasions. Sister also held the position of Principal of the school and Superior of the community in some of these appointments.

Sister Majella had a great love for the children and would fight hard for their rights, spending time with children and parents to solve problems. She was always outspoken and honest, something which was not always appreciated.  She had a deep love of the Congregation and its Founder.

In 1979 Sister Mary Majella applied for and was granted permission to go to Melbourne to complete the Assumption Course. Early in her time in Melbourne, while on a visit to Phillip Island, she suffered a very severe stroke which hospitalised her for many months in the Mater Hospital and William Lyne Hospital in Newcastle to which she was transferred from Melbourne.

After her release from hospital Sister became a resident of the Lochinvar Nursing Home and it was here that she spent her days, involved in stamp collecting, ceramics, arts and crafts while confined to a wheelchair until her death in 1996.

Sister Mary Majella died on 11th January, 1996 and after her Requiem, celebrated by her brother, Fr Harold Campbell and many priests of the Maitland Diocese she was buried in the Sisters’ section of the Lochinvar Cemetery.