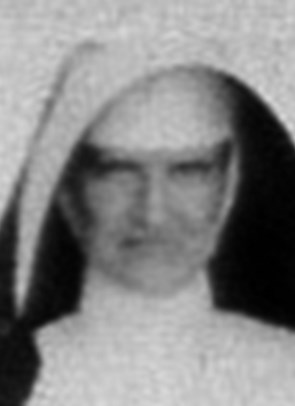 Agnes Mary Cannon was born on 19 January 1889 in Mordialloc in Victoria to Daniel Cannon and Mary Hayden. She entered the Creswick Josephites on 23 January 1911, taking the name of Sister Mary Marcellinus of St Joseph and was professed there on 3 April 1913.

Sister Mary Marcellinus transferred to the Lochinvar Congregation of Sisters of St Joseph on 23 December 1914.  She was twenty-three years old and was one of the seven Sisters to come from the parishes of Creswick and Dunolly in the Ballarat Diocese. She made her Perpetual Vows on 4 July 1934.

During her fifty-eight years as a Sister of St Joseph, Sister Marcellinus faithfully served the Congregation and the Sisters by her prayer and work, contributing in an essential and valuable way to the well-being of the branch houses in many places. She ministered in Creswick, Lochinvar, West Wallsend, Wingen, Aberdeen, The Junction, Cundletown, Swansea, Taree, Gateshead and Krambach.

Sister's love of Melbourne and the Church in Victoria was very real and so she eagerly awaited news of the Eucharistic Congress. God allowed her the happiness of sharing in its great success as she watched and read all she could about it and rejoiced in the honour given to God's name.

Sister Cecilia Collins recalled that Sister Marcellinus “always looked forward to the arrival of the Melbourne paper, The Advocate which her sister, Kate used to send. She would read and re-read everything she could about Archbishop Mannix for whom she had a great respect.  In 1956 Mother Mary Pauline took Sister with her to Melbourne where Mother was to attend a Major Superiors' Conference.  Mr Bob Santamaria who was a friend of the Cannon family obtained an appointment for them with Archbishop Mannix who received them graciously at his residence, Raheen.”

The last four years of her life were spent in St Joseph's Rest Home at Lochinvar where she shared to the full in its peace and care and contributed by her prayer through which members build up the Church of Christ.

Sister Mary Marcellinus died in the Lochinvar Rest Home on Thursday, 1 March 1973. Quietly and with evident joy, she accepted death which she claimed was very close.  Her Requiem was celebrated by Most Rev J. Toohey DD on Friday, 2 March in the Convent Chapel before her burial in the Sisters’ section of the Lochinvar cemetery.