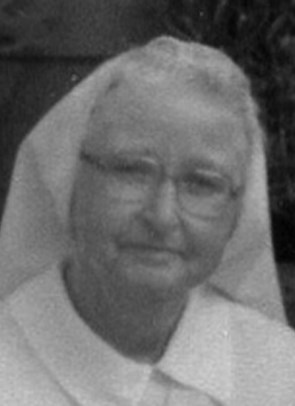 Colleen Marie Gallagher was born on 16 September, 1910 at Krambach. Her parents, Laurence Patrick Gallagher and Sarah Jane Moy were among the prominent Catholic families in the district. It was no surprise that Colleen Marie entered the Sisters of St Joseph at Lochinvar on 23 January, 1927 and was given the name of Sister Mary Mel. Later she was joined by her sister who took the name of Sister Mary Louis.

Sister Mary Mel had obtained her Intermediate Certificate and was proficient in the field of music before entering the Novitiate where she attended the Lochinvar Teacher Training school to study Education Method. She was professed on 3 July, 1929.

Sister Mary Mel had a very good sense of humour and a hearty laugh. She was excellent at tatting and one would see her on playground duty with the crotchet hook stuck in her wimple, near her ear and a tatting shuttle flying in her hands as she produced the delicate work. Stories are told from Sister Mel’s youth of her insisting there was enough money on the plate when it was her turn to contribute to it.

Sister Mary Mel died on the 9 May, 1986 not long after her retirement. She was buried in the Lochinvar Cemetery after her Requiem. Her sister, Sr M Louis was present at her funeral.