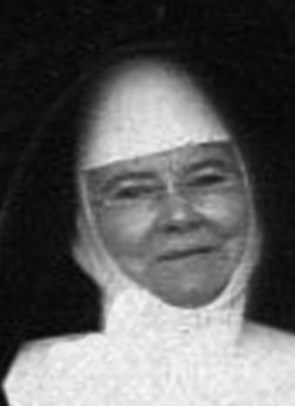 Mary Cahill was born in Morpeth in 25 February 1872 to Edmond Cahill and Elizabeth Brennan.  She entered the novitiate at Lochinvar in the very early years of the Congregation on 15 August 1888 and was given the name Sr M Michael of the Assumption.

Professed on 8 January 1891, she did splendid work in the schools as a young teacher. Her musical gifts were outstanding as well and she distinguished herself as a music teacher in many centres: Lochinvar, Brookfield, Dungog, Merriwa, Largs, Cundletown, Carrington and Wingham.

Her life as a religious, however, was for her the 'thing that mattered.' She was local Superior almost all her religious life, and for three years she was Mother Assistant of the Congregation. Her fidelity to the rule, her love of prayer, were a constant edification to her community. Her many friends recalled her dignity of bearing and her courtesy in acknowledging even the very smallest act of kindness, as well as the thousand kindly things she did known only to herself and those who benefited by them.

Although Sr Michael had spent fifty-five years in religion her death on Tuesday evening. 3 September 1946 came as a great shock to many of her friends. Local Superior at Carrington and music teacher as well, she had been suffering slightly from heart trouble, but a severe attack of influenza seriously affected her condition and she was ordered to the Mater Hospital at Waratah for rest and treatment. At first she responded to the skill and care of the good medical and nursing staff, but serious heart attacks supervened.

The solemn office and requiem were held in the Convent Chapel at Lochinvar on Thursday 5th September at ten o’clock.  Most Rev Dr Gleeson CSsR presided with twenty-nine priests. Rev Fr Dilley sang the Mass Rev Frs Cronin and Whitnell Cantors.  She was buried in the Sisters section of Lochinvar Cemetery