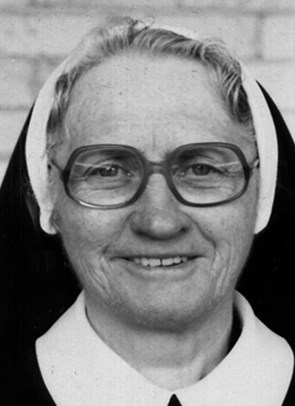 Agnes Bridget Casey was born in Muswellbrook on 1 October 1911. She was one of the seven children born to Michael Casey and Mary O’Brien.   Both parents were of strong Irish stock, the Caseys being from County Clare.  They raised their children in the Catholic tradition.  Agnes and her siblings, Ned, Mollie, Ray, Clare, Dorothy and Jack grew up on a dairy farm at Kayuga near Muswellbrook.

Agnes entered the Novitiate at Lochinvar on 8 September 1930, was given the name of Sister Mary Mildred and was professed as a Sister of St Joseph on 5 July 1933. Her younger sister, Dorothy also entered the congregation and was known as Sister Mary Kilian.

Sister Mary Mildred taught in Secondary Schools in Lochinvar, Taree, Merewether, Wingham, Wauchope, Bulahdelah and Port Macquarie. She was known as a dedicated and hard working teacher who showed great interest and enthusiasm throughout her long teaching life. She loved all her pupils and continually upgraded her wide range of subjects as the various curriculum changes occurred. Fetes and fancy goods stalls were a feature of her schools and helped provide many needed resources for convents particularly in the early days when times were more frugal. Her influence extended beyond the school and parish to the communities in which she lived.  She was a great visitor of the sick in hospitals where people felt really visited even if she stayed only a minute of two!

Sister Mildred was fittingly awarded the Order of Australia Medal in 1985 for her services to education, though she did not consider that she had done anything extraordinary in her life. She said she was pleased to accept the honour for all who had done so much in education.

Sister Mary Mildred was admitted to Wallsend Hospital with chest pains and, after a week seemed to be making good progress.  However she had another attack and died on 24 August 1989, much to the surprise of all, including the hospital staff.  After the celebration of her Funeral Mass in the convent chapel she was laid to rest in the Sisters’ section of the Lochinvar cemetery.