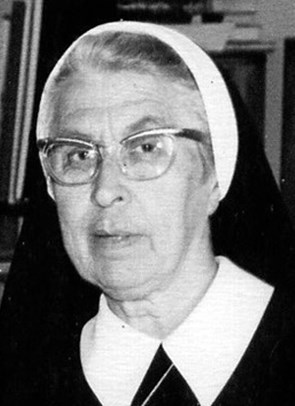 Imelda Mary Page, the only child of William Joseph Page and Anne Agnes Sullivan, was born at Mayfield on 13th October, 1903 and spent her early childhood at Mayfield, living opposite the Redemptorist Monastery.

As a young child she attended the Dominican Convent at Waratah from first to sixth class. After the death of her parents she was sent to Our Lady of the Sacred Heart Convent at Kensington to be with her cousin. Here she lived with the Sisters for one year before coming to Lochinvar Boarding College where she received her secondary education.

Imelda obtained her teacher's certificate at the Teachers‘ Training College, Sydney and returned to enter the Novitiate at Lochinvar on 2nd February, 1924 as Sr M Paul of the Mother of God.

Sister Paul taught in the secondary schools of Taree, Merewether and Lochinvar serving as Principal in all three schools. She also served as Mistress of Method of the trainee teachers, conducted the Religious Correspondence Course in the Diocese for eleven years and was Secretary General of the Congregation for seven years. During her later retiring years, Sister assisted in the Secondary School Library at Lochinvar before finally retiring to the Nursing Home in 1984.

Following the news of her death many ex pupils phoned, some in tears, many expressing a deep sense of loss and others with memories to share of one they valued greatly as a teacher and a friend. The presence of many at her funeral indicated the influence of a remarkable woman, one whose values shaped the lives of many, yet one who saw herself as very ordinary.

Sr Paul was a sincere friend as well as teacher, a steadfast friend to many of her pupils and to their families. She was always anxious to see her students succeed, not only scholastically but throughout their lives. Her interest followed them through their married years and when possible she kept a constant correspondence.

She had the gift of building up and encouraging the pupil who was struggling. She had an extraordinary capacity to relate to those in some way deprived of a parent's love. Inconsolable herself at the age of ten when her father died a year after the death of her mother, she had a remarkable understanding of the grief and sense of loss in the lives of others. She cared for each and had a deep tenderness for anyone who lacked family strength. Hers was a constancy of affection, never effusive but quiet and firm.

Sr Paul, as a teacher was equally at home midst mathematics and literature, but her teaching went beyond these; it was about life. Through literature, especially poetry, she led her students to come to terms with life, the apparent futility of human suffering and the human horrors of war. As one student said "she let us face these huge questions, the mystery of evil and, of suffering in the light of her own faith. She was not afraid of the big questions about life." "She spoke to us of life and death" said the student, "of the sensitivity of the sick person, of the quietness of death, of the last breath, like a candle being blown out."  "When I was sixteen; she left me with no fear in the presence of death." She approached her own death in the same way.

As a teacher Sr Paul's sense of justice was feared and respected. Under an exterior that might have appeared severe, many a pupil learned both a tolerance and a tenderness. She was very firm but very fair. As one ex-pupil said "You couldn't be untruthful to Sr Paul because she was so truthful herself." Her sense of truthfulness and justice was in a sense unbending. It brooked no watering down and continued into her later years where it was seen sometimes as intolerance with the weakness of others. Sr Paul had an affinity with nature and very small children. She would relax in smiles at the delight of creation and creatures and animals and little children responded to her in an exceptional way.

Following a stroke some ten days previously, Sr Paul died peacefully on 23 February 1989 in the Nursing Home at Lochinvar where she had been a resident for about five years.  Requiem Mass was celebrated with Mgr P Wilson as the chief celebrant on Monday 27 February.

Sister Mary Paul Page is buried in the Sisters’ Cemetery at Lochinvar.