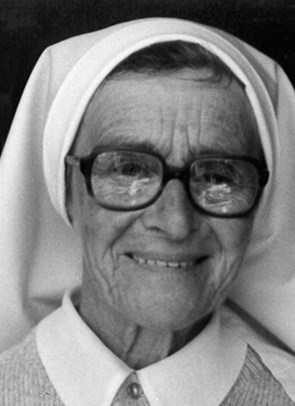 Lillian Anne Crittenden was born in the Taree area on 2 May 1911. Lily was a fourth generation Australian Crittenden. There were eleven children and Lily enjoyed the company of the large family, as well as the extended family as she had numerous cousins in the area.  Lily inherited many important qualities from her parents, Thomas Crittenden and Annie Royan: from her mother a firm, vigilant motherly nature and from her father a love of the land. Lily commenced school at Lansdowne and continued school in Newcastle when the family moved to Hamilton in 1921. In 1923 the family moved to Largs and Lily eventually went to Lochinvar for her High School education.

At little more than sixteen years of age on 23 January 1929, Lily left her family home to become part of a larger family - the family of the Sisters of St Joseph.  She was professed on 1 July 1931 as Sister Mary Paula. Lily lived out her vocation in teaching in schools throughout the Hunter Valley and the near north coast. Many of those years were spent in boarding schools where she was especially able to be an influence on the lives of children in her care. Those features of her childhood, especially enjoying games, stood her in good stead as she joined with the girls and boys in all their games. The football and the skipping rope supplemented the prayer book and the rosary beads. She was a person who could establish rapport with many kinds of people: the children whom she taught, their parents and those with whom she came in contact.

After retiring in 1973 from teaching, Sister Paula began a new apostolate to the people of Toronto and Booragul.  She was a Christ-like presence for the sick and the infirm, visiting people who needed a person of hope. She also worked in the motor mission in Gresford.

In 1987 Lily moved to the Rest Home in Lochinvar, where for her final few years she had to endure the suffering of Alzheimers Disease and cancer. Those who knew her well say Lily still retained an impish smile and a glint in her eye which suggested she knew more than she was sometimes prepared to say.  It was a great comfort to her  that in her final few weeks she was near her cousin Annie, Sister Mary Joachim, a lifelong friend with whom she had grown up at Lansdowne.

Lily's life, a life of faith, marked by dedication to her vocation as a Sister of St Joseph, ended in the early hours of 28 May, 1993.

Excerpts taken from the Words of Remembrance given by her nephew, Paul Casey.