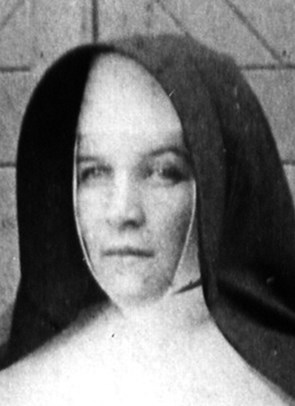 Eva Connolly was the daughter of Michael Connolly and his wife Sarah (née McDermott) born at Luskintyre, Lochinvar on 9 September 1875.  The Connolly family were one of the families that assisted and supported the Sisters in the early, difficult days of the Lochinvar foundation. Besides supplies of fruit and vegetables to supplement the Sisters' meager diet, Mrs. Connolly and her children were available to transport the Sisters by buggy when needed.

Eva entered St. Joseph's Convent Lochinvar on 15th of August, 1891 and was called in Religion, Sr. Mary Regis of the Assumption.

She was received on the 28th of December, 1891, and in January 1892 went to Largs for a short time before being moved to Dungog where she taught for the next couple of years. Sister was professed with Sr. Martina in a ceremony conducted by Fr. Hand on the 3rd January, 1894.

After Profession Sr. M. Regis returned to Dungog. During her short life in religion she also spent some time at Brookfield, Burwood, Krambach and Aberdeen.

She renewed her vows for four years at The Junction (Burwood) Convent, Newcastle on the 12th April, 1896, but  from early in 1897 remained at Lochinvar, a victim of consumption.

She was admitted to the Infirmary where Sr. M. Bernard Woods was already a patient. She and Sr. M. Bernard received the Last Sacraments from Fr. O'Neill C.S.S.R. who was conducting the Parish Mission, on the 4th of July, 1897, in the presence of all the sisters. During their illness the two sisters received Holy Viaticum on most days and were visited by Bishop Dwyer.

On October 24th Sr. Regis died at a quarter to twelve, having received Holy Viaticum earlier in the day. On the 25th we find in the community diary: "Sisters remained up in turn all night. The corpse was removed to the Chapel and visited by her friends”.

On 26 October Mass for the repose of the soul of Sr. M.Regis Connolly was said by Fr. McCormack at 7.30am. Office for the Dead and Requiem Mass commenced at 10 o'clock. His Lordship was present. The funeral left the Chapel at 12 o'clock. His Lordship read the prayers and gave absolution at the grave."