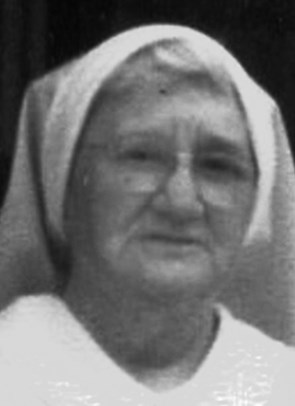 Sister Mary Rosarii was born Edna Dunn on the 23 October, 1900 in Singleton, the daughter of John Thomas Dunn who was a grazier and butcher and Jane Maher whose parents were James Maher and Catherine Donnelly.  Both were from Ireland with the former working on the railway as a Station Master. Brothers and sisters of Edna were Thomas, Catherine, Joseph, Ernest , Charles, Francis and Eileen (Sr Mary Hilary rsj). The family lived at Camberwell .

In 1912 Edna Dunn went to Lochinvar to board for secondary studies till 1916. She entered the Lochinvar Novitiate on 7 October 1919 when Mother Mary Alphonsus was Novice Mistress. During this time she also did her Teacher Training and received valuable training in child psychology and teaching practice given by Mrs Byrnes M.A.  Sister attended several In-services that were special lessons in speech and Physical Culture taught by Captain Hatﬁeld.

After her Profession on 6 July, 1922 and until 1971 Sister worked in many of the Branch Houses in classes ranging from Infants to Year 6.  During this period from 1943 she was School Principal and Superior of the Convent, ministering in The Junction, Dungog, Cessnock (Mt St Joseph’s), Brookfield, Largs, Denman, Wingham, Newcastle and Kendall.  From 1971 to 1978 Sister lived in Taree where she had 5th and 6th classes till 1977. In 1978 she took Religion and Speech classes in 5th and 6th classes.

Sister was renowned during her time in Taree for her visitation of the patients in the Manning River District Hospital. She was also honoured by the RSL Sub Branch with a Certiﬁcate of Appreciation for encouraging children in essay writing for Anzac Day. Yet another honour bestowed upon her for her work in Taree was the Order of Australia. Sister Mary Rosarii was a gifted teacher who had very good rapport with her pupils and a very capable Principal. At times Sister taught Music (piano) and played the organ in the Church. She was a bright, vivacious person who laughed easily.  She was a very spiritual person and loyal and faithful Sister of St Joseph for fifty-five years.

Sister Mary Rosarii spent only a couple of years at Lochinvar from 1978 to 1980 before she died on 1 November, 1980 in Maitland Hospital. Her sister, Sister Mary Hilary Dunn had predeceased her on 10 April 1971. The Requiem Mass for Sister Mary Rosarii was held in the Convent Chapel and her burial took place in the Sisters‘ section of the Lochinvar Cemetery.