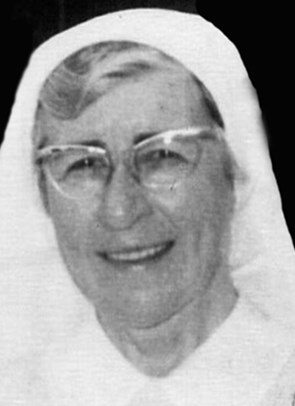 Martha Alice Campbell, second youngest in a family of thirteen, was born to James Campbell and Mary Manery at Nelson Plains on 9 September, 1900.  All her family predeceased her. Four of her nieces entered religion and Fr Paul Campbell, OFM was her nephew.

Martha received her primary education from Sisters of Mercy at Raymond Terrace, walking the several miles from Nelson Plains each day. Her secondary education was obtained at Lochinvar after which she trained as a teacher at Sydney Teachers’ College. After several years as a teacher in the State schools, she entered Lochinvar on 23 January, 1922, was given the name of Sister Mary Sebastian and was professed on 3 July, 1924.

Sister then embarked on her ministry of teaching in the diocese of Maitland and beyond.  Over the years she taught Upper Primary classes at Merewether, Cardiff, Port Macquarie, Summer Hill, Cessnock, Taree, Gateshead, West Wallsend, Belmont and Lochinvar.  In many of those places she was principal of the school as well as superior of the community.

Family and community members who knew her well over many years saw her as a prayerful and tireless apostle, a great lover of her vocation and a cheerful companion. She was firstly a woman of prayer, with great devotion to the Blessed Sacrament, to the holy names of Jesus and Mary and to the Rosary which she often said while walking the streets on visitation. Of prayer before the Blessed Sacrament she once said, “Be there like a candle burning.”

After retiring from fulltime work in the school, Sister spent much of her time visiting the sick in their homes and in the hospitals.  She would go into town by bus and walk to the Royal Newcastle Hospital to give Holy Communion to the sick.

Sr Mary Sebastian was a faithful and dedicated religious who loved her Congregation, her community and her family.  When her health deteriorated she became a resident of the Nursing Home at Lochinvar.  During that time she knew much suffering.  One of the Nursing Home Staff wrote of her at that time “her great character came through in her suffering.”

Sister Mary Sebastian Campbell died at Lochinvar on 11 November 1985 and after the Funeral Mass in the convent chapel she was buried in the Sisters’ section of the Lochinvar cemetery.