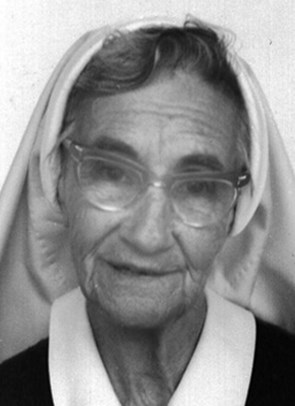 Veronica Beryl Hatton was born on 17 August 1907 to Robert John Hatton and Hilda Beryl Simmons, at Stanford Merthyr. She was the second eldest of a big family of eight children who lived on the Kurri-Cessnock coalfields where a close-knit community faced together the rigours of the depression years during which, in order to survive, the poor fed the destitute.

Veronica did her primary and a little secondary education at St Joseph's School, Cessnock. As the eldest girl, Vianney left school as soon as possible and went to work in a stationery and newsagency business in Cessnock. She showed herself to be very capable, was soon managing the business thus helping to support the rest of the family both financially and practically.

Veronica entered the Novitiate at Lochinvar on 27 June, 1930 and was given the name of Sister Mary Vianney.  Her younger sister, Anne Mary had entered six months earlier.  Sister Mary Vianney was professed on 4 January 1933. During her Novitiate she finished her secondary education and completed her teacher training after her profession.

Sister M Vianney spent forty-eight years teaching Primary and Infants classes at Charlestown, Carrington, Lochinvar, Wauchope, Gloucester, Taree, Merewether, Denman, Bulahdelah Cardiff, Shortland, Dungog, West Wallsend, Tuncurry, Wingham and Kurri Kurri. She was often in small communities of three Sisters, where two Sisters taught the six small classes with the third community member being the music teacher. As well as teaching in some places she looked after boarders. She was always good to sick children and seemed to have a sixth sense when someone was in need and somehow found a way to help them without embarrassing them.

During her retirement years she lived at Wingham, Kurri, Dungog and Shortland. She was generous and efficient and spent her last years assisting with the housework, tending her beloved garden and visiting. Eventually Vianney came Lochinvar Nursing Home to spend her last years, where her kind, considerate and witty presence brought joy and humour to those who know her. She also knew the frustrations and limitations that occur when memory and reality become confused. This was a trial for her in later years at Lochinvar,

Sister Mary Vianney died on 7 June 1990 in her eighty-fourth year and the fifty-fourth year of her religious profession and was buried in the Sisters’ section of the Lochinvar cemetery.