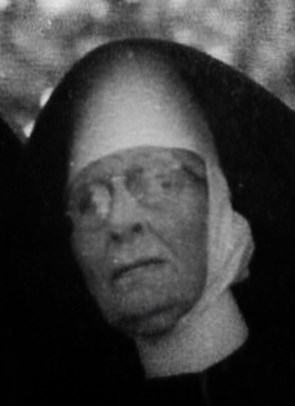 “Margaret McDonald was born in Newcastle on 14 July, 1881. She was one of the large family of James McDonald and Charlotte Parsons. Supported by them in her desire to serve God, Margaret entered the Novitiate at Lochinvar and was given the name of Sister Mary Loyola. She was professed on 4 July, 1901. For the many full years of her active life, she was employed in devoted work for the glory of God and the salvation of souls.

She served a long apostolate in the schools, notably in Brookfield, Dungog and Wingen and in this way of life she was an encouragement to all. Concentrating all her energy in her spiritual life she was able to give herself with zeal to the task of teaching. She was especially interested in giving assistance to young people who consulted her about their future careers. Older people also benefited by her wisdom and came to her for advice. They went away amazed at her knowledge of the world and her strong counsel.

The passing years took their toll and Sister eventually had to give up teaching. However, although failing physically, she remained mentally alert and during these years she gave assistance to children who were found school difficult. Because she was a woman of mighty faith she wanted others to possess the pearl of great price. Her own appreciation of the faith made her want to share it with others, especially with those interested in becoming Catholics.

When her strength failed she was not content to be idle. She looked for new interests and took on the work of writing, journalistic work for which she gained a diploma in freelance writing. At the end of her life her eyesight began to fail. Her physical sight weakened but the light of faith burned stronger in her as the years went on. Sister Mary Loyola gave great glory to God through the strong faith she had.”

Sister Mary Loyola McDonald passed peacefully away on the morning of 19 June at St Joseph's Convent, Lochinvar, surrounded by the Community which had been in constant attention when it became evident that her life was drawing to a close. She was in her eighty-sixth year and the sixty-sixth year of her religious profession.

The solemn office and Requiem for the repose of her soul were celebrated on 20 June 1967, after which the interment took place in the Lochinvar cemetery. His Lordship presided in the Sanctuary and a choir of thirty-one priests chanted the Divine Office. The celebrant of the Mass was Rev. Father Dilley of Lochinvar. The pall-bearers were Messrs. Mc-Fadyen, Burges, Knipe and Barry.