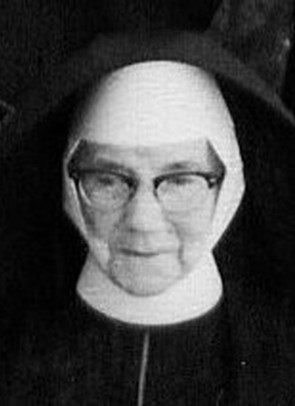 At the turn of the 19th century, Most Rev. J. Moore, Bishop of Ballarat visited Ireland to obtain priests for the goldfields of his diocese and aspirants for the teaching Orders of Sisters there. Many Bishops did this over the years, because of their appreciation of the strength of faith and the Catholic traditions of that land.

Among the young girls that offered their lives was Miss Sarah Bolger.  The journey was arduous, especially as she was leaving her beloved home and was faced with the uncertainty of the future.

On 26 October 1900 at Creswick in Victoria she began her formation as a religious taking the name of Sister Maria Joseph of the Sacred Heart and was professed on 25 October 1902.  Later, she taught at Dunolly.  As the gold-rush waned and the population moved, the enrolments at Creswick and Dunolly decreased.

His Lordship spoke of the valiant woman who, in the ninety-third year of her life (seventy-two of which had been spent far from her native Ireland) had died after a life of sacrifice and devotion. Sister's long life of zealous work for Christ, her gracious, cultured personality, her alert mind, interest in people and events and her bright vivacious disposition, all combined to prepare her to meet, with her lamp trimmed, Him to whom she had given her life.

Sister Maria Joseph Bolger was buried in the Sisters' section of the Lochinvar cemetery.