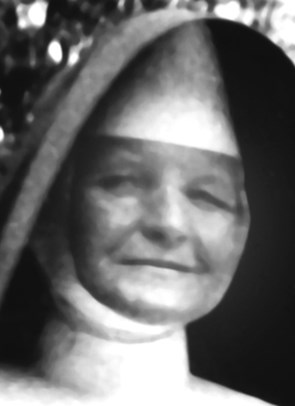 Maria Margaret Parrott, daughter of John Parrott and Agnes Logan, was born at Llangollen, Cassilis, on the 1st July, 1888.  She was one of a family of twelve children from whom two vocations came: Maria and a brother who became a Missionary of the Sacred Heart Order. Maria entered the Novitiate on 16 July 1914, took the name of Sister Mary Peter of Our Lady of Mount Carmel and was professed on 10 January 1917.

Whilst living quietly and unknown by the world, her piety and happy disposition was known to all with whom she came in contact: her Sisters in religion, the children she taught and their parents.

Sister had gone to Lochinvar from the Star of the Sea Convent in Newcastle to make her annual Retreat and being unwell, stayed on in the hope that her health would improve. However, she was seized with a stroke and died peacefully in Maitland Hospital on Friday morning, 15th September 1966.

The Office and Requiem Mass for the repose of her soul took place on Saturday morning.  His Lordship Dr Toohey presided in the sanctuary and a choir of twenty-two priests chanted the Office and joined in the singing of the Mass which was led by the Sisters' Choir and sung in English.  The Celebrant of the Mass was Rev Father Leo Fenton with Rev Fathers Maurice Cahill and Hinchey, Deacon and Sub-Deacon respectively.  Rev. B. McCosker was Master of Ceremonies.  The Cantors were Rev. Fathers Flatley and Ross.

The interment took place immediately after Mass in the Lochinvar Cemetery.  The Bishop and Clergy led the cortege and the Sisters, relatives and students followed.  Pall bearers were Messrs Ron Pearson, Brian Pearson, Desmond Parrott and Harold Parrott.