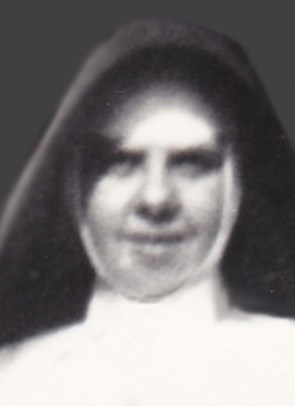 Emily Agnes McGrorey, the youngest daughter of John and Emily McGrorey (Peters) and a niece of Monsignor Victor Peters was born at Wallsend on 30th January, 1897. She was a pupil of St. Patrick's School Wallsend before becoming a boarder at Lochinvar.

The Lochinvar records for 8th December, 1915 say that Miss Lily Brooder and Miss Emily McGrorey arrived with their friends and took dinner. In the afternoon they were received into the novitiate. Emily McGrorey took the name, Sister Marie Therese of the Immaculate Conception. Fr. Peters, visiting sisters and the parents of the postulants left at 3 o'clock.

She was to spend twenty-five years in the Congregation, many of them in suffering and ill health. As a postulant sister suffered with a skin complaint which necessitated medical care and a month's treatment in 'Cintra' Private hospital, but a cure was not effected and she was afflicted with the condition all her life.

In July, 1916 Sister received the habit with Srs. M. Benedicta, Anslem, Tarcisius and Hilary, and was professed with the same Sisters on the 3rd July, 1918. After Profession she went to Sydney for medical treatment before taking up her first ap­pointment at Cessnock.

Subsequently Sr. Marie Therese was to live in other branch houses and at Lochinvar as a teacher of Primary School Classes. Some places that were the scene of her apostolate were Cessnock, Cundletown, Largs, Kurri Kurri, Mt. St. Joseph's Cessnock, Largs and Gloucester.

Sister’s last appointment was at Gloucester in May, 1940. She was brought home from there in October and with Sr. Rosalie was admitted to the Infirmary. Then after a few days in the Mater she returned to the Infirmary in a critical state with tuberculosis.

During the last weeks of her life, Sr. Marie Therese was visited by His Lordship, Dr. Gleeson and some priests in whose parishes she had worked. Her Uncle, Mgr. Peters came to see her frequently. On December 3rd he gave her Holy Vi­aticum and Extreme Unction, and she was able to receive Holy Viaticum on most of the following days.

On the 22nd December Fr. Peters and Fr. Cronin, said the prayers for the dying and Bishop. Gleeson came and prayed with her. At midnight on the 23rd December sister died in the presence of the community. She was buried in the Sisters’ cemetery at Lochinvar at 5.30pm on Christmas Eve; The Bishop and Fr. Peters with Fr. Ward carried out the service.

Office and Requiem Mass were offered in the Convent Chapel on the 16th January, 1941 for her eternal repose.