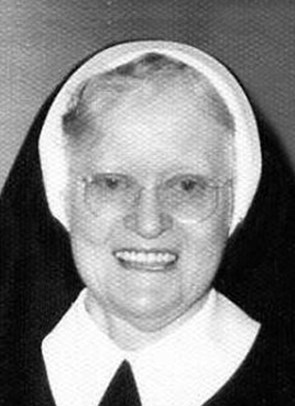 Sr Mary Barbara, Mary Ellen O'Neill, was born in Lithgow on September 20, 1890. Her father was Joseph O'Neill who had come from the Oberon district and her mother, Mary Malloy was an Irish immigrant from County Donegal.  Mary Ellen was one of eight children, five boys and two other girls, all of whom predeceased her.

Her first year of schooling was with the Brown Josephites at Lithgow but then the family moved to Merewether, Burwood as it was then known. It was there that she first had contact with the Lochinvar Josephites.

After leaving school she trained as a dressmaker and her evident talent in this field soon obtained for her a teaching position at Kurri Kurri by which time the family had moved to Cessnock. Her musical ability kept her in touch with the Sisters from whom she learned both violin and singing and eventually at the age of twenty-three she decided to join the ranks of the Sisters and use her gifts in the service of God.

So Mary Ellen entered on 16 July, 1913 and received the habit on January 5, 1914 as Sr Mary Barbara. Two years later on 5 January, 1916 she pronounced her First Vows and for sixty-nine years she faithfully lived that dedication vowed so willingly on that day.

After profession Sr Barbara worked in many parishes and in many different capacities. She spent time in Denman, Carrington, Dungog, Kurri Kurri, Cessnock, Merriwa, Summer Hill, Newcastle, Edgeworth and Aberdeen and worked also in the early 1950's at the Migrant Camp at Greta.

From 1922 to 1933 Sr Barbara was Boarder Mistress at Lochinvar and worked assiduously for her charges.  Her influence would have been felt by the hundreds of girls who passed through the school during that time and many of her "old girls" kept in contact with her to the end.

In  1941 she was elected Novice Mistress and as Mother Mary Barbara remained in that position until 1949.  During that time she was responsible for the training of Novices who look back with gratitude for the care and concern she showed them and the wonderful example she gave. From 1949 to 1955 she was a member of the General Council and gave herself untiringly to this task as in every other work she undertook.

She was a woman of prayer and her devotion to Our Lady and the Rosary was almost legendary.  She was always a cheerful soul and often would greet the staff in the morning singing "The top of the morning to you".  Not even blindness dulled her good humour and during the seven years she was unable to see she was never bored.  The unexpected restoration of her sight was a source of great joy in her last years.

Sister lived at Lochinvar from 1972 to 1985 and died peacefully in her sleep in the Nursing Home on Sunday morning 6 October 1985, aged ninety-five.

Requiem Mass was at 2.30 p.m. on Tuesday 8 October.  Mons R. Kennedy presided in the absence of the Bishop and the homily was given by Rev Fr Lavery.  After the Mass Sister Mary Barbara O'Neill was laid to rest in the Sisters' section of the Lochinvar cemetery.