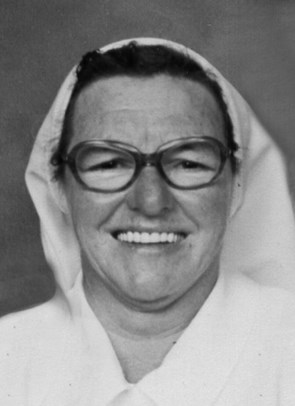 Mary Josephine, the youngest child of John Joseph Jensen and Catherine Mary Foley, was born at Marrickville on 21 October, 1922.  She joined her beloved sister Rose and the small brother, Edward who died at birth before Mary Josephine was born.

A city girl, raised in Marrickville and Yagoona, Mary Josephine must have inherited something of the venturesome spirit of her Norse father who had taken to the sailing life at the age of fourteen and jumped ship at Newcastle. He married Catherine Foley in 1912 and so became part of a great network of Catholic families of the Millers Forest/Raymond Terrace district.

On leaving school Mary Josephine trained in secretarial work and expressed the desire to join the Carmelites. Instead she entered the Novitiate at Lochinvar having been encouraged to do so by her cousin, Sr Mary Alexius, the eldest of the well known Boyle family of East Maitland.  In religious she chose the name Sr Mary Catherine in honour of her mother and was professed on 6th July 1943 with five other young women who were to be her constant companions throughout life:  Srs Regina, Margaret Connell, Eucharia, Hyacinth and Loretta Mary.

For the next five decades Sr Catherine lived and worked in a number of communities.  The list included Cundletown, Dungog, Carrington, Cardiff, Aberdeen, Edgeworth, Summer Hill, Krambach, Bulahdelah and Merewether Beach. She is remembered as a happy teacher who made learning fun.

In her ten years in Cundletown she also cared for the young boys in the Boarding School, always with kindness and good humour.  Conditions in the old convent were far from palatial. She worked tirelessly with the local community to help build the new Convent and Boarding School on the high point of the bank of the Manning River close to the wharf and out of flood range.

Catherine’s last appointment was to Wauchope where she spent the last ten years of her life. She loved the country and was appreciative of the simplest things of life and inventive enough to make do with whatever came to hand.  She was ready to join in all the activities that brought people together, laughter ever bubbling from her lips, grateful for the gifts of love that were poured on her in such boundless measure that it over-flowed continuously from her to those she met.

Sr Catherine died on 6th December 2000 in the Wauchope Hospital after a short and painful illness.  In typical fashion Catherine got up in the middle of the night with unbearable pain and drove herself to the hospital to be told the news that the end of her life was in sight.   After a couple of days she stirred in the hospital bed and coming to consciousness asked: “Where am I?” and when told “You are on the road to Heaven” her response was: "Thanks be to God”.