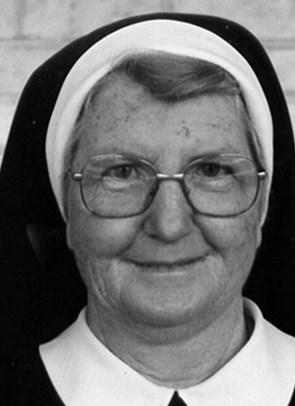 Catherine Jean Richards was born in Taree on 2 February 1925, the daughter of James Thomas Richards and Mary Clarice Baker. At the time of her birth, the family was living at Lansdowne.  Later the family moved to Lorne near Kendall and then to Oakhampton near Maitland in 1941. During this time her siblings Aileen, Shirley, Neta, Don and Joan and step-siblings Betty, Allan, Ken, Mary, Gordon and John were born.

Upon winning a State Bursary in 1938, Catherine Jean went to board at St Joseph’s Convent in Taree for her secondary schooling.  Her final two years were spent at the Boarding School in Lochinvar where she attained her Leaving Certificate and a Teachers’ College Scholarship.

At the age of seventeen, on 28 December 1942 Catherine Jean entered the Sisters of St Joseph at Lochinvar, taking the name of Sister Mary Frances of Our Lady of Perpetual Succour.  She was professed on 4 July 1945.

During her time in the Novitiate Sister did her teacher training which prepared her to minister in the schools of the Maitland-Newcastle Diocese as a teacher of primary classes. From 1958 she was also the school principal.  Her first appointment was to Denman and then to Cardiff, The Junction, Wingham, Largs, Lochinvar, Kurri Kurri, Gloucester, Carrington, Merriwa, Belmont, Shortland, Denman for a second time, West Wallsend, Summer Hill (Sydney Archdiocese) Kendall (Lismore Diocese) and Taree.  She was a very good teacher and offered kind assistance to the young Sisters in the school and convent community. In 1980 Sister spent a short time of renewal in New Zealand at the Dominican Priory Teschemakers Course while living at Our Lady of the Missions Convent in Christchurch.

In 1990 Sister Mary Frances moved out of teaching and into supportive ministries in Gateshead and Carrington where she was a valued parish and community worker. Suffering from poor health for much of her life, she was a courageous and gracious person with a great sense of humour.

Her years of retirement from 1990 were spent first at the Southern Cross Apartments in Swansea until declining health caused her to move to the Calvary St Joseph’s Nursing Home at Sandgate.  Even there her sense of ministry continued as she prayed quietly besides residents when they were sick and sometimes dying and often was seen comforting their relatives.

Sister Mary Frances died peacefully at the Home on St Patrick’s Day, 17 March 2014 after suffering a stroke about a week before her death. Following her Funeral Mass, she was laid to rest in the Sisters’ section of the Lochinvar cemetery.