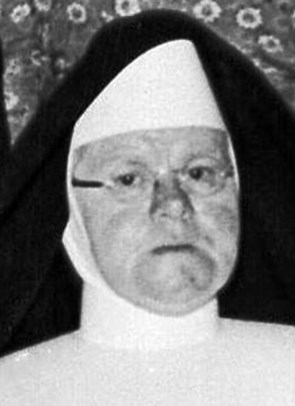 Born in Merriwa in 1895, Mary was the daughter of John Roach and Susan Doyle, the eldest of a family of ten. Her home was a good Catholic one, a Rosary home but one that had its crosses and trials, the greatest of which was the death of her mother when Mary was fourteen years old.

Mary then came to Lochinvar and later entered the Novitiate on 16 July, 1915. She was given the name, Sr Mary Gregory. Her aunt, Brigid Roach, known as Sister Mary Camillus had entered there in 1900. After a fervent preparation she was professed at the beginning of 1918.

Her whole religious life was spent at Lochinvar. She was a strong woman, hard-working with a wonderful sense of humour as well as being kind and gentle-hearted. She was known for her great devotion and love for the sick Sisters of the Congregation. Her death was a great loss to the Community. Those who knew her expressed their admiration for her willingness to help wherever help was needed.

Sister's health had not been good for some time but no one felt death was so imminent until a fortnight before, when she was taken to the Mater Misericordiae Hospital where the doctors pronounced her case was beyond medical skill. When given the verdict Sister accepted it with her usual courage and resignation and spent the short time left her to prepare for her journey to eternity.

On Friday morning, 17 April 1964, when it became evident that her hours were numbered, Mother Mary Pauline hastened back from Sydney to be with Sister in those last hours. Mother Mary Cletus and some of the Lochinvar Community were also praying around Sister's bedside when, without a struggle and conscious to the end, she breathed her last, aged sixty-eight. She had served faithfully for forty-nine years as a Sister of St Joseph of Lochinvar.

The Solemn Office and Requiem Mass took place in the Convent Chapel at Lochinvar at 10.30 a.m. on Saturday, 18 April. In the absence of His Lordship, Most Reverend John Toohey, D.D., Rt. Reverend Monsignor Forde presided. A choir of forty-two priests chanted the Office of the Dead. The celebrant of the Mass was Rev Father Vince Casey, with Fathers Campbell and Hornery as Deacon and Sub-deacon respectively. Reverend Father McCosker was Master of Ceremonies and the Cantors were Rev. Fathers Flatley and Delaney.

The interment took place immediately after Mass in the Lochinvar cemetery. Monsignor Forde and the clergy led the cortege and the Sisters, students, relatives and friends followed. Pall bearers were Messrs Burgess, McFadyen, Knipe and Shannon.