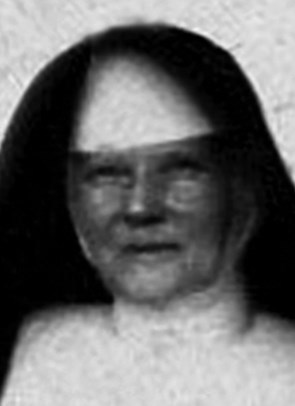 Mary Londrigan was born on the 18 December 1873 in the Upper Hunter, near Scone. She was the daughter of James Londrigan and Ellen Cotter who, with seven children eventually moved down to Maitland where they lived in Regent Street. Mary came to Lochinvar to embrace the life of a Sister of St Joseph. She was given the name of Sister Mary Alphonsus of the Blessed Sacrament.

Her first appointment was to the little convent of Largs. Other appointments followed Merewether, Cessnock and Carrington. When the Sisters of St. Brigid relinquished the charge of Cundletown, the Sisters of St. Joseph assumed the new responsibility and the superior-ship was assigned to Mother Mary Alphonsus. In the cause of education she did not spare herself. From Cundletown she came back in 1917 to Lochinvar, this time with added responsibility of training the Novices. Her influence on the members of the congregation was great - an influence which sprang from a deep and intense spirituality and an upright and noble character.

Mother Mary Alphonsus was appointed the superior of the community in Merewether and so began a new phase in her task of instructing others unto justice. She built the convent there after which she returned to the Mother house where she resided for the rest of her life. At first she was Mother Assistant and in 1935 came the office of first Superior. In 1940 she became first Councillor and retained that office until her death. She was a dignified person with a graceful reserve which gave emphasis to every word that she spoke. Her every word seemed to have a greater force because of this reserve.

Mother Mary Alphonsus’ death on 21 May 1959 was not unexpected after two months of suffering borne with the patience, fortitude and resignation

The Obsequies took place at St. Joseph's Convent, Lochinvar on 23 May. The tribute paid by His Lordship Most Rev. J. Toohey, D.D., Rt. Rev. Monsignor Peters, V.G.P.A. and the priests who came in their numbers revealed the high esteem in which she was held.

The interment took place immediately after Mass in the Lochinvar Cemetery, the Bishop and Clergy leading the cortege and the Sisters, friends and students following.