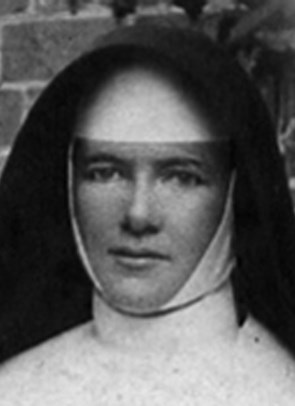 "On 8 May 1948 at St. Joseph's, Lochinvar, Sister Francis Mary McNamara, a revered pioneer Sister of the congregation, died at Lochinvar aged eighty-six.

Mary McNamara was born at Miller's Forest on 11 September 1862. In 1884 she was the fifth postulant to enter the young institute established in the Maitland Diocese in 1883, by the late Most Rev. Dr. Murray.

She was a daughter of Henry and Rosannah (Moy) McNamara, one of the Irish Catholic families who, in the very early days, settled around "The Forest," Raymond Terrace, Morpeth and the surrounding district.

Two sisters followed her lead to the religious life: Sister Mary Josepha to Mount Street North Sydney and Sister Mary Magdalen, R.I.P. to Lochinvar. Before her long life closed, she had the happiness of seeing a large number of a younger generation of her family answer the call. These were Rev. Father Jen­sen (Cessnock), Rev. Brother Valens, S.M. (Campbelltown), her grand nephews and Sister M. Anacletus (Lewisham), Sisters M. Alexius, Catherine, Austin and Liguori (Lochinvar) her grand nieces.

Sister Francis Mary was one of the best known members of the Lochinvar Congregation, having been head teacher and Local Superior combined in many of the Branch Convents. She ministered in Lochinvar, Merriwa, Cessnock, Burwood, Carrington, Largs, Dungog, Krambach, Wingen, Brookfield, Aberdeen, Wybong, Denman, Cundletown and Gloucester.

Her sixty years of religious life were a record of courage and indefatigable zeal for the glory of God and the good of souls. For the last three or four years of her life she was inactive owing to almost total blindness, a great cross which she bore with heroic resignation.

The interment took place on 10 May. The whole religious Congregation which was present at Lochinvar for the annual retreat accompanied the remains of their much loved Sister to her last resting-place in St. Patrick's cemetery. Rev. Father Jensen officiated at the bier and at the graveside and was assisted by Rev. James Walsh (Morpeth), and Very Rev. H. Ward (Lochinvar)."

Adapted from the "Maitland Catholic Sentinel"