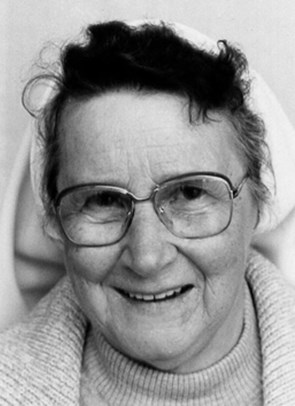 Mary Violet Peel was born on 30 March, 1911 at Adamstown in Newcastle. Her parents were John Edward Peel who worked as an engine driver and Elizabeth Esther Hazell.  Mary Violet was the eldest in the family with a young sister, Monica Agnes who also became a Sister of St Joseph, with brother, Vincent John making up the family.

When the family moved to Abermain, Mary Violet went to St Joseph's School for her primary schooling.  It was there that she began learning the piano at the age of eight.  She continued with her music when she went to the Dominican Sisters in Maitland for her secondary education.  On leaving school she worked at a tailor‘s shop in Cessnock and became a tailoress.

Mary Violet entered the Novitiate at Lochinvar on Pentecost Sunday, 1929 aged eighteen and was given the name of Sister Mary Zita of the Sacred Heart. Her profession as a Sister of St Joseph took place on 5 January, 1932.  While in the Novitiate she learned to play both the violin and the organ.

A gifted musician Sister Mary Zita ministered for the next sixty-seven years through music teaching and Church liturgies in the parishes of Krambach several times, Wingen, Carrington, Gloucester, Merriwa several times, Wingham several times, Charlestown, Aberdeen and Gateshead. She taught music to private pupils, worked with the teachers in the school to give children an appreciation of music and was the church organist in many of the parishes where she ministered. This meant keeping herself informed and up to date with the music syllabus of the time, changing approaches to classroom teaching and of the renewal of the Liturgy.

During those years she endeared herself to all who lived and worked with her through her happy disposition, her prayerfulness, her cheerful generosity in sharing her gifts for cooking and sewing.  She had a great love of birds, always having either a canary or budgerigar or galah to teach to sing.  In her life, she knew what it was like to experience pain. From an early age, she endured arthritis. Her pain took its toll as she became older and less active. She felt keenly the loss of the independence and freedom she cherished so much in the prime of her life and felt keenly the death of her own sister, Monica who predeceased her in 2005.

Sister Mary Zita died at St Joseph’s Home in Sandgate on 28 May, 2006.  Her Funeral Mass took place in the Convent Chapel at Lochinvar on 31 May. She was ninety-five years of age and in the seventy-second year of her religious profession.

Taken from the Words of Remembrance given at her Funeral Mass