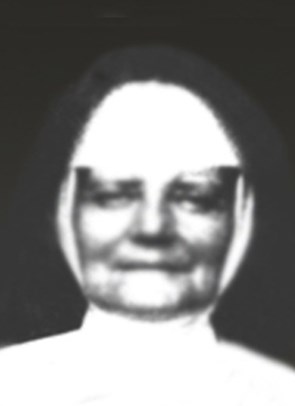 Margaret Vizzard, born on 3 July 1876 at Corowa, was the daughter of Josiah and Margaret Vizzard (Moran). She was a certificated nurse with a wide experience in her profession, having trained at the Coast Hospital, Little Bay.

On 24th May 1913, at the age of thirty-seven, Margaret entered the congregation at Lochinvar. She received the name in Religion of Sr Mary de Pazzi of Our Lady Help of Christians and was professed with Sr Mary Barbara on the 5th January, 1916.

Sr M de Pazzi was the first trained nurse to come to the congregation. From the time of her entrance into the institute she was active in the care of the sick, both Sisters and children. She also attended the homes of local people when there were cases of grave illness as well as caring for sick Sisters in branch houses when the need arose. To the people to whom she ministered she brought a great wealth of experience gleaned over the years, an uncanny diagnostic ability, a warm, caring heart and considerable expertise in the art of invalid cookery to tempt jaded appetites.

Although she spent limited periods in a few branch convents at Cardiff, Wingen, Gloucester and Largs, Sr M de Pazzi was mainly located at Lochinvar where she supervised the Infirmary, cared for the Sick sisters and children, escorted Sisters and boarders to doctors and taught music.

She was a tower of strength to her superiors where care of the sick was concerned Those who knew her and had experienced her care were able to say: "Sister was a kind and gentle nurse who would go to no end of trouble for her patients."

Sister suffered a long, distressing illness which gradually sapped her strength during the last years of her life. She eventually became bedridden in the Infirmary where she had worked so long and so well, carefully tended by the Sisters.

Sr M de Pazzi died on the 31st January, 1937 in the presence of Fr Ward and the community. She was buried on the 1st February 1937 in the Sisters’ Cemetery at Lochinvar and Solemn Office and Requiem Mass were offered for her on the 4th  February.

On her death it was written: "Her passing removed one whose years in religion, and indeed in the world ... had been unselfishly passed in the service of others. Her hosts of friends ... deeply mourned this gentle personality with whom nursing as well as religious life was a vocation followed with loving and generous fidelity."

From the Maitland Sentinel