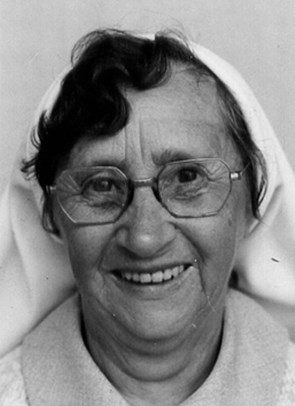 Monica Agnes Peel was born on 24 March 1914 and baptised five days later by Father Hugh Cullen in the church at Abermain. Her father was John Edward Peel, an engine driver and her mother was Elizabeth Esther Hazell. Monica had an older sister, Mary Violet who became Sister Mary Zita and a younger brother, Vincent more frequently known as Mick. An early indication of Monica’s future could be gained from her choice of Confirmation name - that of Cecelia.

Monica started her schooling at St Joseph's Abermain moving through to secondary school with the Dominican Sisters. She began music lessons at around nine or ten years of age at Abermain and then continued at St Mary‘s Newcastle, the Dominican Convent, passing all music examinations with honours.

Monica entered the novitiate at Lochinvar on 12 June 1931 and was known as Sister Mary Placid, joining her sister Violet (Sister Mary Zita) who had entered two years earlier. She was professed on the 3 January 1935. A gifted musician, Monica served the congregation and the diocesan church and beyond through music teaching and church liturgies in Denman, Carrington, Wauchope, Wingham, Aberdeen, Port Macquarie, Krambach, Kurri Kurri, Belmont, Summer Hill, Cessnock, Gloucester, Tuncurry, Merriwa, Swansea and Charlestown. The majority of her pupils would have known her as Sister Mary Placid.

In I985 she retired from teaching music but still continued to assist with church liturgies and recreational music or entertainment for the sick and elderly in Swansea, Tuncurry and Charlestown travelling to nursing homes and hostels to give the residents some old-time singing. This music was always appreciated in the nursing homes, especially at Hillside Mt Hutton.

In January 2001 Monica moved to the Swansea Convent complex and when Southern Cross Tenison Apartments came into being in 2002, the sisters, Monica and Zita were among its first residents. Becoming ill with cancer Monica spent much time in hospital. Her death came quite suddenly in the Belmont Hospital on 12 July 2005. She was ninety-one years of age and in the seventy-first year of her religious profession. After the celebration of the Funeral Mass in the Convent Chapel at Lochinvar Sister Monica Peel was laid to rest in the Sisters’ section of the Lochinvar cemetery.