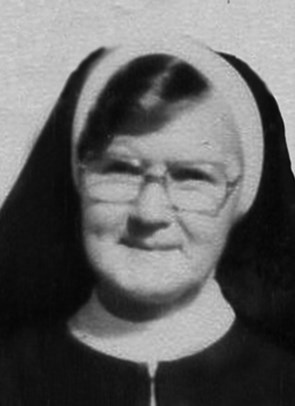 Patricia Eileen Callinan was born on 18 April 1929, the fifth child of James Callinan and Mary Hartmann, her siblings being Leo, Betty, Marge, Anne, Reg, Mary, Jim and Karl.  Patricia received her Primary education from the Sisters of St .Joseph at Wingen and later at the District Rural High School in Scone.

Her father, Jim, had an outstanding knowledge of horses and acclaimed success in training, handling and breeding them.  Patricia, or Tricia as the family called her, inherited some of her father's ease in handling and riding horses, a skill she enjoyed in her pre-Sisterhood days.  From her mother she learned life-long house pride and excelled in the virtue of practical hospitality.

Patricia entered the novitiate on 1 January 1947, joining her sister Anne who was professed later that year.  Patricia was professed as Sr M Josepha of the Sacred heart on 5 July 1949 and in the coming years served in Lochinvar (three times), Denman, Port Macquarie, Aberdeen and Taree, often caring for young boarders. Her last appointment was in Tuncurry.

In her early years Patricia was very shy but gradually discovered in herself a robust confidence in choosing her opinions and proposing her involvements.

Patricia had an immense pride in and a very deep affection for her family. In later years developed a skill, born of a deep natural empathy, in caring for the aged and invalid. This was evident particularly during her appointment to Tuncurry where she was able to devote most of her time to visiting the sick and aged of the parish.  Until smitten by a rare and rapidly fatal condition of the body tissue she seemed almost inexhaustible in her efforts and her empathy for others.

The disease that caused her so much suffering was named Scleroderma. In the last few weeks of her life she endured great discomfort and pain. Patricia was a loving gentle person, a woman of simple faith and a wonderful patient.

Sister Patricia Callinan breathed her last in St Vincent’s Hospital in Sydney on 1 September 1980 and after the funeral Mass led by her brother Father Reg Callinan, she was buried in the Sisters’ section of Lochinvar Cemetery.

Based on Words of Remembrance by Sr Carmel Mary