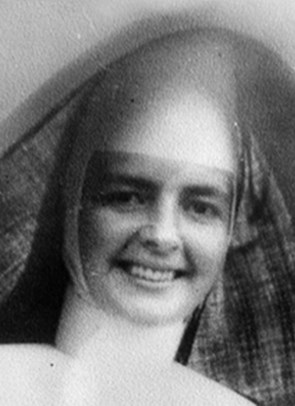 Thelma Rae McCarthy was born on 13 January 1925, the daughter of John McCarthy and Thelma Bacon of Wauchope on the north coast of New South Wales. She had three sisters: Hazel, Shirley and Colleen and one brother, John. An ex-student of St Joseph’s College Lochinvar, she entered the Novitiate at Lochinvar in 1948 at the age of twenty-three, was given the name of Sister Marie Bernard and was professed as a Sister of St Joseph on 3 January 1951.

As Sister Marie Bernard died at the age of twenty-nine just six years after entering the congregation, her life in the congregation and her teaching ministry were very short. Her only appointment was to Cardiff where she taught in the parish primary school. The love of the children for their teacher was demonstrated when fourteen of the senior pupils travelled by train to Lochinvar to attend her Funeral Mass. They laid a beautiful cross of camellias on her grave after the interment. This gracious act touched, deeply Sister's sorrowing mother.

Sister's death occurred at St. Vincent's Hospital, Sydney, where she had for the last two years of her life, made periodical visits to a specialist in the hope of a cure for her condition, known as leukemia. Her bright, happy and hopeful personality aided the doctors' efforts for some time, but eventually her death came on 4 August 1954 in the presence of some members of her own Congregation, the nursing sisters and two priests.

At the Solemn Requiem and Office, His Lordship, Most Rev Edmund Gleeson, CSSR, Bishop of Maitland, presided over a choir of thirty priests, among whom was the Rev Father Purtell, rector of the Cardiff parish. His Lordship was at­tended by the Rev J Delaney as Master of Ceremonies. Celebrant of the Mass was the Rev J Hughes, with the Rev M Hanrahan and the Rev H Campbell (a former pupil of Cardiff school), Deacon and Sub-deacon respectively. His Lordship officiated at the bier and at the graveside. Immediately before the final absolutions in the chapel, His Lordship expressed sincere sympathy with the sorrowing mother and family of Sister Marie Bernard and with the Sisters of St. Joseph on the loss of a young and worthy member of the Institute.

Pall-bearers in the funeral cortege were Messrs J McCarthy, W Archer, T Shanahan and E Foley. The Senior College Students formed a guard of honour as the casket passed through to the gates and then joined the funeral procession to St. Patrick's cemetery.