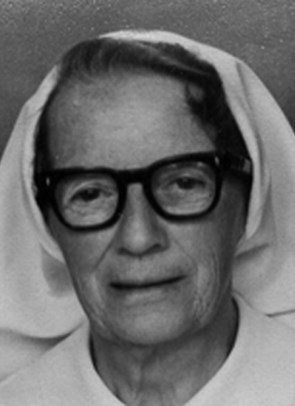 Uriel Kathleen Perkins was born in Wingen on 13 April 1906.  Her father was Patrick Perkins, a grazier and her mother was Winifred Mullins.

She entered the convent on 1 July 1932 and took the name of Sister Mary Virgilius of the Precious Blood.  She was professed on 24 January 1935.  Her sister, Geraldine had entered at Lochinvar in 1930.

Sister Mary Virgilius’ great gift was her loving heart for her family, her Sisters in the Congregation and for her students. The story is told when as the Superior of the community at Port Macquarie, she would quietly go into the dormitory where the primary school boarders had been settled for the night and go from bed to bed giving out lollies, much to the disapproval of the Boarder Sister.  Her spirit of adventure, of inquiring and questioning, was the gift she brought to her teaching.  She was a gifted teacher who constantly appealed to her students’ imagination.

Virgil (as she was known to many) had a special awareness of the urgency of passing on the faith to the next generation and was always urging young people to be their best selves, to do great things for God; to be big-hearted and generous in giving.

Excerpts from the Words of Remembrance given by Patricia Boland rsj