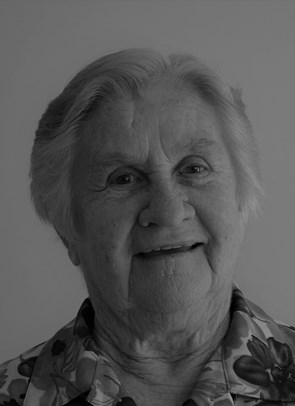 Ursula Teresa Kauter was born in Muswellbrook on Good Friday, 15 April, 1927. She was the fifth child of Charles Kauter and Ellen Leehy. She and her siblings, Mary, Joan, Mick, Pat and later Margaret grew up on the farm at Dartbrook.

Ursula was proud of the fact that her four grandparents, Nicholas and Jane Kauter and Jeremiah and Margaret Leehy, were members of the welcoming party when the four Sisters arrived in Lochinvar from Perthville in 1883 to establish the congregation of the Sisters of St Joseph in the Maitland diocese.

After completing her schooling at St Joseph’s Primary School, Aberdeen and as a boarder at St Joseph’s College, Lochinvar. Ursula entered the Novitiate and was given the name of Sr Mary de Paul.  (After the Second Vatican Council she reverted to her baptismal name.) Aged twenty, she was professed as a Sisters of St Joseph on 6 January, 1948.

For the next twenty-seven years Ursula ministered as a primary school teacher and principal. She was first appointed to Cessnock to be followed by many appointments in the diocese of Maitland-Newcastle and in the Archdiocese of Sydney at Summer Hill. Following a renewal year at Assumption Institute in Melbourne and further study at Signadou College in Canberra, Sr Ursula was asked to be principal of the St John of God Special Residential School for Boys at Morisset.

There she displayed her ability to deal with both teachers and students. Many of the boys had severe learning problems and disastrous backgrounds but in Sr Ursula they found a person who was just and fair and who looked after their best interests.

Contact with extremely disadvantaged youths paved the way for Sr Ursula to take on pastoral work at the Booragul/Bolton Point Housing Estate, often called Mikal Way. She spent thirty years in Western Lake Macquarie: some at the St John of God School and some at Teralba, but she said the most challenging time of my ministry was spent living in a small unit at the Booragul Housing Estate.

Overcoming her fears, Sr Ursula used the skills learned as School Principal and her innate compassion to listen, to guide, to set up a homework centre, to liaise with teachers at the local state school, to co-operate in a community garden, to help people with the inevitable government forms, to work with members of the Booragul Residents’ Committee, and much more.  She became a friend of the disadvantaged people of the area, having a special care for deprived children. She grieved at the poverty of experience and opportunity that hindered their development.

After a long and fruitful ministry, Sr Ursula retired to the St Martin de Porres aged care facility at Waratah where her carers created a warm and secure home for her and where she died peacefully on 22 July 2021.  The Mass of Christian Burial was celebrated Father Maurie Cahill in St Joseph’s Chapel on 30 July during the COVID pandemic.  Its restrictions meant that a number of her relatives, including her nephew, Archbishop Peter Comensoli from Melbourne were unable to attend.

Having prayed for Sr Ursula’s eternal repose, a small group of her relatives and Sisters accompanied her to the Lochinvar Cemetery where she was laid to rest in the Sisters’ section. May she rest in peace, amen.