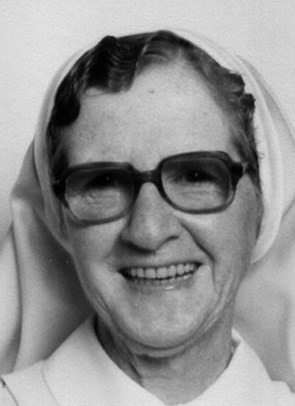 Veronica Maude Unger known in the family as Vera was born the fifth child of Samuel Unger and Mary Royan of Upper Lansdowne, on 30 August, 1911.  Her birth certificate named her Maud but her Baptismal Certiﬁcate of 10 September, recorded by Fr Thomas Mulcahy proclaimed her to be Mechtilde. Vera lost her mother at the birth of her younger brother, Stanley. That loss, when Vera was only two years old, never ceased to sadden Bede who longed, one day, to see her mother’s face. She was cared for by her Grandmother Unger till her father married again some eight years later and was able to bring the family back together. A further eight children were born and a warm and caring family nurtured young Vera who became the expert big sister for the younger brood.

Vera took to heart the lessons of her faith, receiving her First Holy Communion on 15 August, 1919 and being confirmed in 1922. On completing school as far as it went in that isolated spot, she asked to be accepted into the Novitiate at Lochinvar on the Feast of the Immaculate Conception, 8 December 1929, was accepted and given the name of Sister Mary Bede.   After her profession as a Sister of St Joseph on 6 July 1932 she embarked on a fifty year apostolate as an Infants teacher extraordinaire in places from Dungog to Port Macquarie, Cardiff, Carrington, Cessnock, Abermain, Merewether and Aberdeen.

Her special delight was the First Communion preparation year after year as each new group of small children came under her spell. For Sister Mary Bede, her vision could be summed up by the words of the poem:

In the breast of a bulb is a promise of spring, in the little blue egg is a bird that will sing.

In the heart of a seed is the hope of the sod, in the soul of a child is the Kingdom of God.

Sister Mary Bede had a way with children, always having a soft spot for them. She got the best out of them and basked in the glow of their achievements. She was also noted for her devotion to visiting. She was never happier than following up this sick one or that one who had lost their beloved. Her heart was large and compassionate and her list of special intentions could always expand still further.   Her later years in Tuncurry and Muswellbrook gave her full rein to minister as a member of the Legion of Mary and the Angelus Group. Even in the Nursing Home when she returned to Lochinvar, her final days were filled with “My Apostolate”. Even in her final years the aching bones and failing body enclosed a strong and vibrant spirit.

So she was ready when the opportunity for heaven presented itself on 1 July 1998. Sister Mary Bede slipped gracefully away to the heavenly Jerusalem to be with the mother whom she longed to see and all the members of her very large family.  After the celebration of the Rite of Christian Burial, Sister Mary Bede was buried in the Sisters’ section f the Lochinvar cemetery.