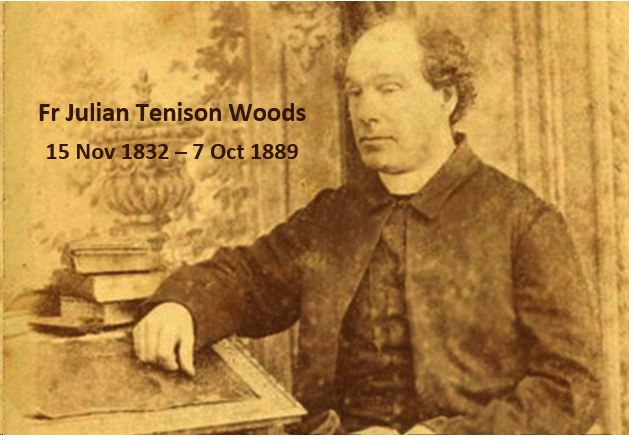 The anniversary of the death of Father Founder, Julian Tenison Woods, falls this year the day after the 150th anniversary of the death of Father Johannes Hinteroecker sj, his friend, his ‘kindred spirit’, in Mary MacKillop’s phrase. The fact that Father Woods learned of the death when missioning at Branxton has particular interest for Lochinvar Sisters of St Joseph and the local people. Lochinvar is 14 km from Branxton, midway between Maitland and Branxton.

The two priests met in January 1867 in Penola when Hinteroecker visited with Bishop Shiel. The eminent Austrian scholar and botanist saw Woods among the people he had served for ten years. Within a few months, both took up appointments in Adelaide, Hinteroecker in Norwood and Woods as well as his pastoral duties, as Bishop’s Secretary, beginning a school system as Director of Catholic Education, and undertaking the Josephite venture. Mary MacKillop writes that Hinteroecker told him ‘his work was of the greatest importance though he must drink some bitter drops of the Chalice of the Lord’. His words proved true.  By 1871, Woods was near breaking point. Overstretched by his tasks, he was also enduring sinister opposition to the Sisters (and himself, the real target) orchestrated by his avowed enemy, Father Charles Horan.  At the opening of the Sisters’ Franklin St Chapel of St Joseph, Patron of the Universal Church, 19 March 1871, Hinteroecker preached, taking an unequivocal stand for Woods and the Sisters.

He warned that those against the Josephite Institute might find they were fighting against God.  A little over a year later, after the five months of Mary’s excommunication and the near disbandment of the Josephites, Woods, assisted by Hinteroecker and fellow Jesuit Tappeiner, sang Mass for the feast of St Ignatius at Norwood. A few days later, he and Hinteroecker left Adelaide to preach missions, Woods to New South Wales, beginning in Maitland diocese, and Hinteroecker to Tasmania.

Woods knew the support of this intelligent, uncompromisingly dedicated priest, of solid intellectual ability, twelve years his senior. It didn’t stop the opposition, but it was a bulwark. On 10 October when Woods learned of his death (did Father Tappeiner sj telegraph to Woods?), memories of Hinteroecker must have flooded to him.  From Branxton on 10 October, Woods wrote to Mary. ‘I cannot describe what I feel of this sudden and awful blow…My sorrow is deep indeed’. In his loneliness, he accepted ‘the sweet will of God’. Hinteroecker had caught pneumonia and died between missions. He was fifty-two.

The church at Branxton where Woods preached this mission was on the corner of Station Street and the New England Highway. Some of our forebears married there, some attended school there, as late as 1920s.  On 6 October Woods travelled from his mission at Raymond Terrace to Branxton, passing through Maitland and Lochinvar. On 7 October, he returned to Maitland through Lochinvar to preach at a Dominican Profession, returning the same day to Branxton. As he looked to the north, from the train, or travelled on the highway through Lochinvar, did he have a premonition or pray that one day a foundation of Sisters of St Joseph would be made there?