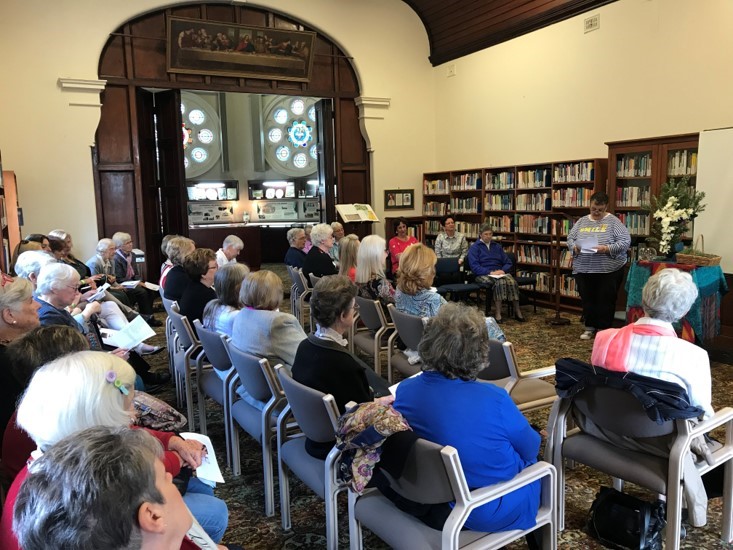 Ex-students came from near and far, such places as Hobart, Melbourne, Canberra, Brisbane and Sydney to attend the annual St Joseph’s Lochinvar Ex-student Reunion on 18 May 2019. As the Chapel was unavailable following the fire in November 2018, the traditional Reunion Mass was replaced by a Liturgy of the Word in the Dilley Library which had been the original chapel from 1893 until the current chapel was opened in 1923. This room, which most ex-students knew as the Sisters’ Community Room faces the large chapel.

There about seventy ex-students including a number of Sisters gathered with the joy of meeting old friends, the eldest being our intrepid Sr Jane Frances. A visitor remarked, You can feel the Sisters and girls love each other. Sr Jeannine French and Anne Millard had arranged a central feature: a large Sisters of St Joseph Congregational Cross, covered in white chrysanthemums. We sang, uplifted by Anne on keyboard and Cathy Mahoney’s leading of They’ll know we are Christians by our love. We were invited to take a sprig of rosemary, dip it in holy water and sprinkle in blessing towards the being-renewed, interiorly burnt chapel. As Cathy intoned a Litany of the Saints, we sang in response, moving in procession to bless our loved chapel, then placed our sprigs around the cross. We concluded with fullhearted singing of the Lochinvar hymn, Holy Joseph, guard and guide us, make thy children all thy own.

After the Gospel reading, Sr Lauretta Baker, Congregational Leader, shared a reflection, inviting us to hear Jesus’s call to love each other, just as He has loved us. Sonya Solomou, President, then spoke, welcoming all and telling of the fundraising by donations and raffles to provide scholarships for needy students.

Sonya invited Sr Jan Tranter to speak about the celebrations planned for the 130th anniversary of the death of Father Julian Tenison Woods, an item of interest to all present.  The Josephite Leadership Teams are committed to raising the profile of Fr Woods and recognising him as founder while recognising the 110th anniversary of the death of the foundress, St Mary MacKillop.  The aim is to draw all with a Josephite heart to new awareness of our founding story. Jan pointed out that in this room, there was a deep connection with our founding Sisters and Fr Woods as we prayed where our founding and early Sisters had prayed. Our founding Sisters of 1883 had entered at Perthville after meeting Fr Woods and were instructed by him there. They planted a lasting tradition of him as Father Founder.  Jan concluded by thanking Sonya and Kath Shean for their unswerving dedication in working hard to make the Reunion a reality.

The principal, Mrs Patricia Hales, (nee Walton, ex-student) spoke about many matters, noting that St Joseph’s College Lochinvar once again, has a Year 12; that the Year 12 Hospitality Class had prepared the meal we would enjoy as part of their assessment; that the regular Monday morning staff prayer was in this very room and how the staff value this time together. She referred to Sr Patricia Egan’s input to the College staff on the Josephite spirit and tradition.

The group then moved to MacKillop Hall where we enjoyed chat over a delicious meal. We hope the students’ assessments reflected our appreciation. Sonya and Kath drew the raffle prizes, with fun and joy for all.

One ex-student in the 40 year group sent a message of appreciation for the whole day, including Even the raffle prize which I won, was prepared with much love and attention. I really appreciate the work that was put into the day, making our reunion such a memorable occasion. Look forward to our 50th!

One in the 50 year group wrote that she especially enjoyed Patricia's sharing of the current school's experience. The food was a credit to the Year 12 class and added to the enjoyment. She continued, It is interesting to reflect on the significance that my two years at Lochinvar has had on my development as a person.  Only two years in 1968-69 BUT what an influence! The weather, living conditions etc were trying but all the other enriching aspects, far outweigh these inconveniences.....so the influences: the people, what they had to say, how they instructed and how they conducted themselves...... all very significant for my maths teaching in a public school. Another reflection, is that a lot of those dedicated people in public education had a Catholic education, like myself.

Maybe the most humorous story of the day was related by the ex-student who went in her lunch break the day before to have her hair done for the happy occasion. Four hours later she emerged. By language difficulty with the hairdresser, her hair was dyed bright purple. It took four hours to be restored to normal. Then she had to work till 8 pm to make up the lost time. She had a lovely Reunion after this unexpected episode. She obviously wasn’t related to Lydia of the purple dye trade (for those who know the story in Acts 16:14)! 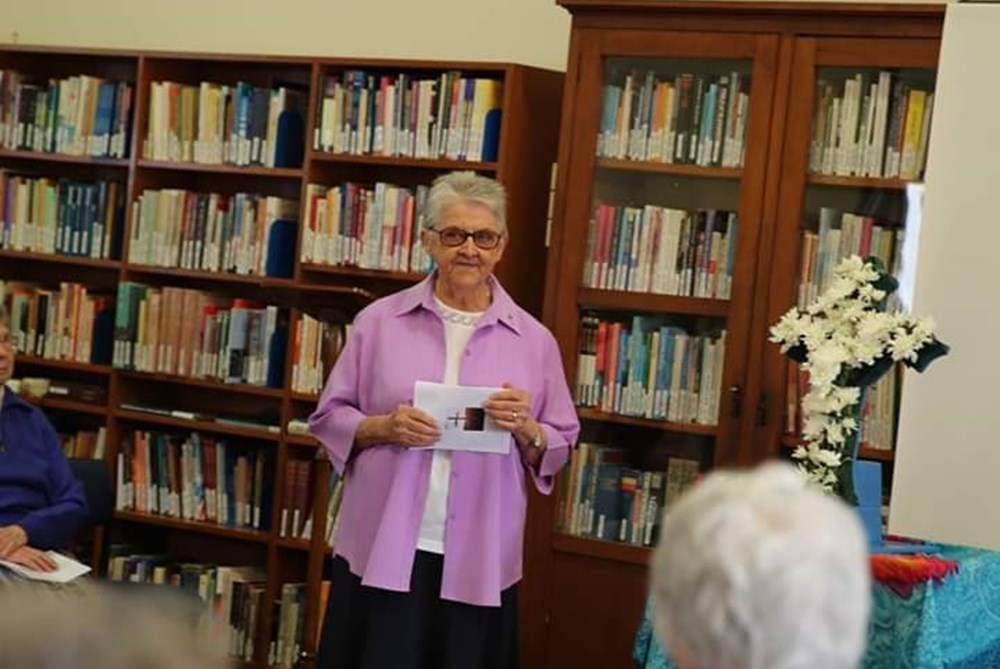 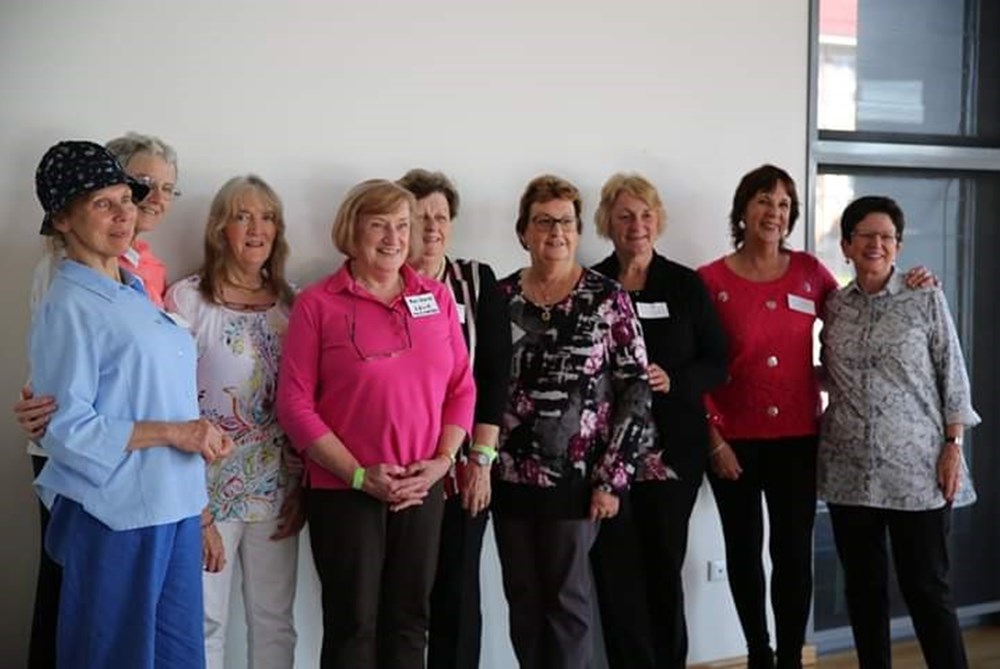 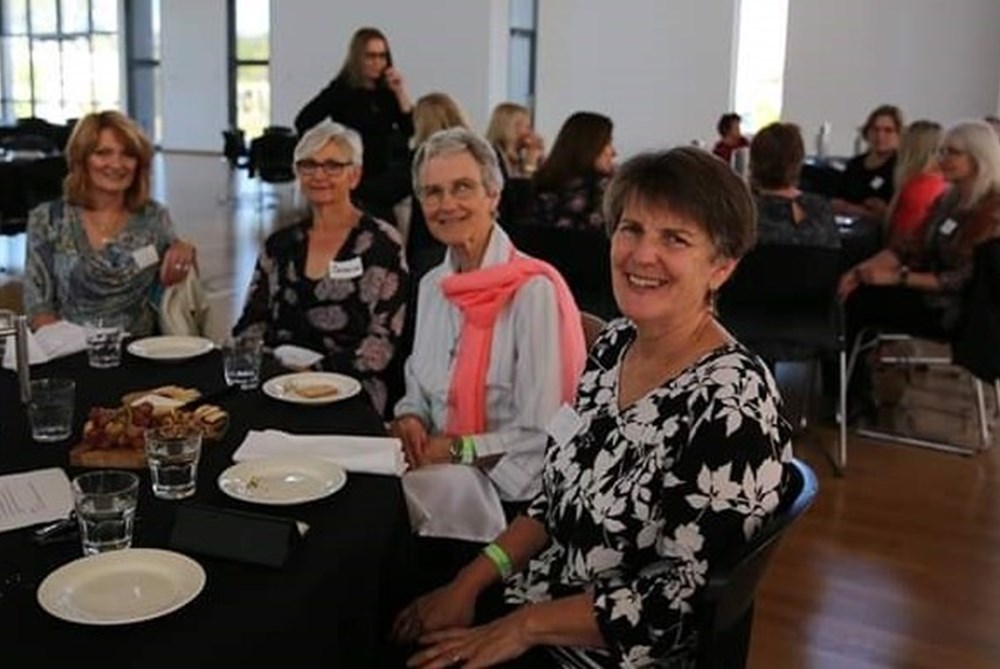 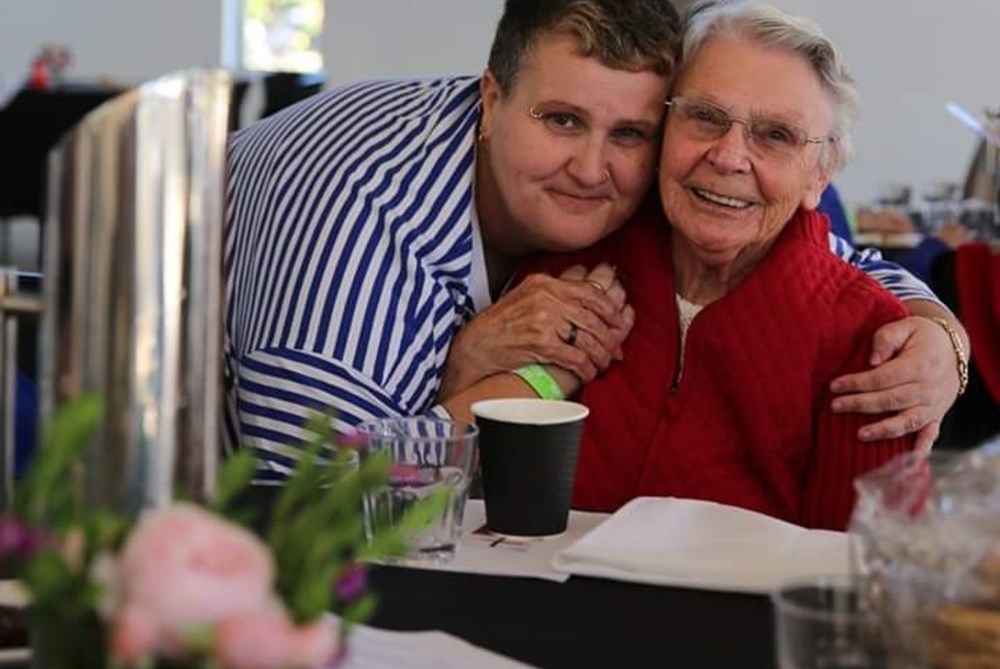