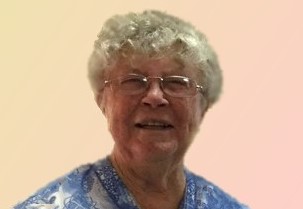 It was a typical winter morning in Lochinvar with a cold westerly wind blowing when some family members and Sisters of St Joseph gathered on 22nd June 2020 to pray for and celebrate the life of Sr Kathleen Mernagh.  Cold it may have been outside but the warmth of love for Kathleen was felt inside St Joseph’s Chapel.  Sr Kathleen had died peacefully in Lingard Hospital at Merewether on 18th June in her 88th year.

The numbers of those wishing to participate in the Mass for Christian Burial for Kathleen were reduced by the restrictions on funeral services because of the Coronavirus.  Despite the limitation on attendance and the absence of congregational singing, those present participated wholeheartedly in the celebration of the Mass.

Sr Kathleen was born in Adamstown on 19th July 1932 to Joseph Mernagh and Mary McKay.  She was the loving sister of Thomas, Winifred, Elizabeth and Brian. In 1953 at the age of twenty she entered the Novitiate at Lochinvar and was given the name of Sr Mary Eudes.  Following the reforms of the Second Vatican Council she reverted to her baptismal name.

After her Professions as a Sister of St Joseph, Kathleen began her ministry as an Infant and Primary School teacher in parishes from Port Macquarie and Wauchope, down the coast to many Newcastle suburbs, out to Denman and Merriwa and many places in between. When she left the classroom, Kathleen served as the Parish Pastoral Associate in Branxton and Greta.  On her retirement she became a member of the St Vincent de Paul Society.  With her strong sense of social justice she took the opportunity to support refugees, assisting them to read and write in a new language.  She was among the thousands of people who did the Reconciliation Walk over the Sydney Harbour Bridge in 2000.  Ever a great supporter of parish life, even in her latter years in the Mayfield parish, she took Communion to the sick and house-bond.  In the spirit of her Josephite founders, she responded to the needs as she saw them.

The Scripture readings chosen for Sr Kathleen’s Mass reflected the depth of her faith in a loving and faithful God.  The first reading was from the letter to the Ephesians with the message: Glory be to him whose power, working in us, can do infinitely more than we can ask or imagine.  The reading from John’s Gospel spoke of Sr Kathleen’s love of the Eucharist: As I, myself draw life from the Father, so whoever eats me will draw life from me. The response to the Responsorial Psalm was most appropriate:  I will walk in the presence of the Lord, in the land of the living.

Bishop Brian Mascord, a life-long friend of the Mernagh family presided at the Mass and was joined by a number of priests from parishes where Sr Kathleen had ministered.  Sr Jan Tranter delivered Words of Remembrance.  So too, did her nephew, Anthony and her brother, Brian.

At the conclusion of the Mass the cortege moved to the Lochinvar cemetery where Sr Kathleen Mernagh was buried in the Sisters’ section, the sacred place hallowed by the memory of the Sisters who had gone before her. May Kathleen sleep in peace until God awakens her to glory.