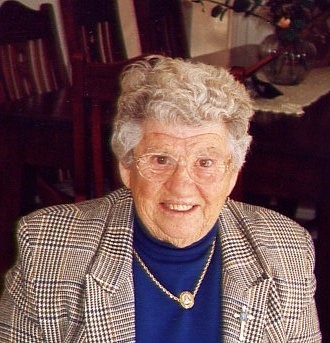 Many people gathered in St Patrick’s Church in Lochinvar on 23rd July 2019 for the Funeral Mass for Sister Mary Eucharia.  The large congregation included many friends, relatives, colleagues from school staffs of former days and people from parishes where Sister had lived and worked as well as Sisters from her own congregation.  Most evident were the many parishioners from Charlestown, her home on four occasions in an active ministry of seventeen years and the place of her last appointment before moving into retirement.  The entrance procession moved through the church, to the measured melody of Dwellers in the Holy City:

Saints around the banquet gathered, claim her now, as next of kin;

Lead her to the family table; let the feast of joy begin.

How appropriate were these words for someone named for the Eucharist and whose life had brought joy to so many during her long life of ninety-six years.

Brian Mascord, a former student at St Joseph’s Primary School, Charlestown and now Bishop of Wollongong presided at the Mass.  He was joined by Fathers Paul O’Neill, Gerard Mackie, Maurice Cahill and Peter Street.  In his homily Bishop Brian spoke warmly of his friend and of her years as a teacher of Infant classes, as Mistress of Novices, as a pastoral worker in parishes and as a hospitable presence wherever she was located.

Sr Lauretta Baker, who was one of Sr Eucharia’s novices delivered the Words of Remembrance. With humour and affection she spoke of Sr Eucharia's fidelity to her vocation, her ability to make friends easily and her enthusiasm and joy in all that she did.

The scripture readings and the hymns chosen for the liturgy focused on the Eucharist.  The first was from 2 Kings 17: 10-15, the story of the generous woman of Zarephath who shared what she had with the prophet Elijah, and the Gospel was from Luke 9: 11-17, the story of Jesus feeding the crowd with five loaves and two fish.  The congregation sang with faith and full voice The Table of Plenty, I am the Bread of Life and We Are Many Parts.

Sr Eucharia was born Mary Jackson to James Jackson and Sarah Howie in Cessnock on 25 January 1923.  She was the loving sister of Jean, her twin, and Beryl.  After completing her education at St Joseph’s Lochinvar she returned there to enter the Novitiate on 26 December 1940, was given the name of Sr Mary Eucharia of St Stephen and was professed as a Sister of St Joseph on 6 June 1943.  She then embarked on her life of service that took in years in Lochinvar, The Junction, Cardiff, Charlestown, Summer Hill (Sydney Archdiocese), Merriwa and Morisset before moving in 2005 to a less demanding life, firstly to Lochinvar and then to the Tenison Apartments in Swansea.

After fourteen years in Swansea, Sr Mary Eucharia died peacefully in her home at Tenison on 16 July 2019.  Following her Funeral Mass on 23 July, she was laid to rest in the Sisters’ section of the Lochinvar cemetery.  On leaving the Church the funeral procession moved through a guard of honour formed by students from St Joseph’s College at Lochinvar - a fitting tribute to her years of loving service to young people. May she rest in peace