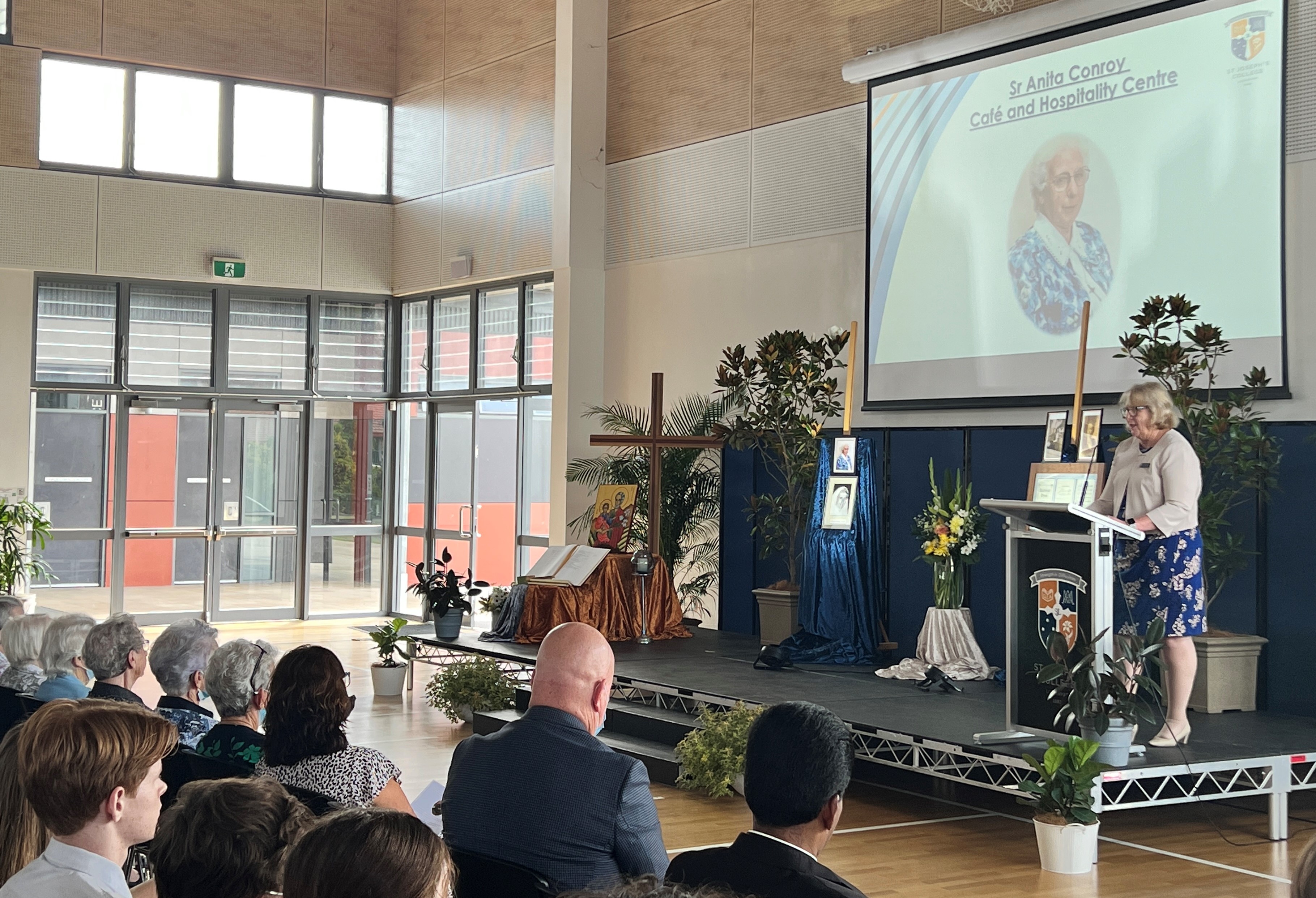 For Everything Give Thanks with a Grateful Heart

This was the theme of the prayerful celebration of the feast of St Joseph’s at St Joseph’s College Lochinvar.  St Joseph was invoked as the Father of Tenderness during the ceremony attended by all the students and staff and invited guests.  Such a celebration was welcome news as COVID regulations these last two years had restricted similar gatherings.

The invited guests included the Sisters of St Joseph from the local community, Mr Brian Lacey, Assistant Director of the Catholic Schools Office in the diocese and Fr George Anthicadu, Parish Priest of the Maitland Catholic Region.

After the Acknowledgement of Country and the setting of the sacred space, we listened to the Scripture readings and Fr George’s homily before interceding for the needs of the world today in the Universal Prayer.

Then followed a Dedication Ceremony where newly refurbished facilities were officially named in honour of two Sisters of St Joseph who had made significant contributions to the life of the College.

At the invitation of Mrs Hales, College Principal, and in the presence of Sr Gerard’s niece, Sr Ruth Long, Sr Patricia Egan spoke of the Long family’s close association with this school ever since the Sisters of St Joseph came here to Lochinvar in 1883.

Kathryn Long entered the Sisters of St Joseph in 1904 at the age of thirty and became known as Sr Mary Gerard.  She was a very gifted artist and poet, and prior to her entry had had a number of her poems published.

When the school was registered as a secondary school in 1915, Sr Gerard was a member of the first staff, teaching Art and Languages in the school for many decades. Her pupils remembered her as a much-loved teacher, “the most gentle and kindly lady” with “infinite patience and marvellous insight” ... “an artist who created pictures in oils and watercolours but also in words”.

When the first annual College Magazine was produced in 1922,  Sr Gerard was responsible for editing and publishing it and distributing it to ex-students, a role she continued for the next thirty-one years.

In 1933 the school was fifty years old and to celebrate that occasion, Sr Gerard with her poetry skills wrote the words of the Lochinvar Hymn.  The music was composed by a quite famous musician, Dom Moreno, a Benedictine monk from New Norcia in Western Australia.

Sr Gerard is also remembered as one who, over many years, painted the stage backdrops for the numerous concerts performed in the former school hall now being named in her honour.  Click here for Sr Patricia's Address

Mrs Hales spoke about Sr Anita Conroy, the principal of the College during the time that she herself had been a student. She began by saying it was a great privilege to speak about Sr Anita Conroy and to name the Café and Hospitality Centre in her honour in the presence of her spiritual sisters, the Sisters of St Joseph and her biological sisters – Sr Clare, Sr Angela and Mrs Aileen Murphy as well as her niece Ann Maree Naylor.

Mrs Hales recounted Sr Anita’s life story: how she born in Glen Innes, moved to Newcastle, went to school firstly at St Joseph’s Merewether and then at St Aloysius’ Girls School at Hamilton, before entering the Sisters of St Joseph in 1944 at the age of eighteen. She became a secondary school teacher, completed a Bachelor of Science Degree at the University of Sydney, and was appointed Principal of the College in 1968, a position she held with distinction for fifteen years.

In conclusion, Mrs Hales said, “There is no doubt that Sr Anita lived her vocation, embodied the charism of the Josephites, challenged and inspired a generation of women and left an indelible mark on Catholic education in this Diocese.... It is highly appropriate that today we recognise the enduring gift that she was to this community and remember her legacy through the naming of the Anita Conroy Café and Hospitality Centre.”  Click here for Mrs Hales' Address

Following the ceremony, the guests were invited to join the College Executive for a chat over a beautifully prepared and presented morning tea in the newly named Conroy Cafe.