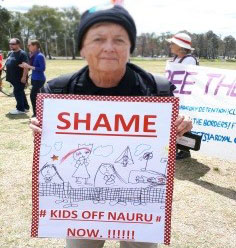 Sr Carmel Hanson was among a group travelling to Canberra on Tuesday 16 October to attend the rally, Australians Say NO to Kids in Detention, organised by Rural Australians for Refugees on the lawn behind the Old Parliament House. Carmel encourages us to take action, in her following reflection.

This week there have been rallies all around the Nation demanding that our Government take immediate action to close down the Australian- made detention centres of Manus and Nauru and bring all the detainees to Australia. In particular efforts have zeroed in on the Children on Nauru. There are still 95 children held on Nauru who have spent all their lives or more than four years in detention because their parents were seeking protection. Locking up children is never the answer.

Every day refugee and human rights advocates, doctors and others are speaking out about the rapidly worsening situation for children detained on the Pacific island of  Nauru. They have warned that a mental-health crisis on Nauru is exploding as hundreds of asylum seekers stranded there lose hope of making it to their intended destination: Australia. Such hopelessness is contagious.

Adults and children are suffering from depression, anxiety and post-traumatic stress disorder, ‘traumatic withdrawal syndrome’ or ‘resignation syndrome’ leading to significant levels of self-harm and suicidal attempts.” On Tuesday 16 October, a doctor addressing the Canberra rally spoke of children biting their arms and refusing to eat or communicate.

In the past week, Medecins Sans Frontieres (MSF), also known as Doctors without Borders, has been forced by the Nauruan government to leave the island. MSF has called for the immediate evacuation of all asylum seekers and refugees from Nauru and an end to Australia’s offshore detention policy.

As a teenager I discovered the horrific facts of the Nazi persecution of the European Jewish people. I was overcome with disbelief at the confronting images from the Auschwitz concentration camp. I asked my parents what did they do to stop the genocide and the response was that they had no idea what was happening overseas.

Phone or write to your local Federal member.

Write/email the Prime Minister,  Opposition Leader and the Minister for Immigration