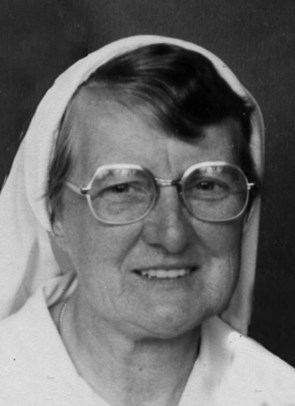 Edna Sarah O’Brien was born on 14 August 1915, the fifth of ten children at Pappinbarra near Beechwood in the Hastings River District on the New South Wales north coast. Her father was Herbert Hastings O'Brien, grandson of Larry O'Brien who was a convict sent to Botany Bay for refusing to pay six pence to the Church of England. Herbert was an out-going, jovial man, very committed to his Catholic faith and a hard-working dairy farmer.  Her mother was Catherine Steele, a Presbyterian who never put any obstacle in the way of the children being brought up as Catholics.  She became a Catholic sixteen years after their marriage drawn to the faith through the steadfast devotion of her husband.  She had artistic talent and loved music and art. As well she cultivated a beautiful garden.

Edna’s Baptismal Certiﬁcate records that she was baptised seven months after her birth when the priest came round on his circuit. It shows how seldom the Catholics of that predominately Irish community experienced the ministry of the priest; yet they held on to their faith and passed it on to their children. Later in her childhood they had the luxury of Mass every second month. It was then that her parents with the smaller children rode in the buggy to Mass and the older children walked the three or four miles, carrying their shoes and socks so they could cross the creek and then arrive respectable for Mass.  The children learned their prayers at their mother's knee but it was their father who taught them the catechism and prepared them for the sacraments.

Edna had very little formal education, attending the public schools at Beechwood and Pappinbarra where she repeated Sixth Class because she was too young to leave school and because the nearest secondary school in Kempsey was too far away. It was not until she entered the congregation that she had the opportunity to do the Leaving Certiﬁcate, completing the work in two years. She then did her teacher training at Lochinvar before taking up her first appointment. She continued to educate herself all her life as she was an avid reader.

Edna followed her sister, Annie who had become Sr M Declan.  She entered the Novitiate at Lochinvar on 28 December 1934 and was given the name, Sister Mary Beatrice.  She was professed on 30 June 1937. Her first appointment was to Krambach. From there she moved up and down the coast and through the Hunter Valley teaching Infant and Primary classes at Wingen, Carrington, Merriwa, West Wallsend, Merewether, Gloucester, Cessnock (Mt St Joseph’s and St Patrick’s), Kurri Kurri, Largs, Kendall, Swansea, Newcastle, Gresford, Charlestown, Wauchope, Tuncurry, Muswellbrook and Bulahdelah.

Sister Beatrice was never a bookish teacher nor did she teach for results. One former pupil recalled her as being “a breath of fresh air in the school and how she introduced her students to the great masters through prints from old calendars which she cut out and put around the walls of the classroom.” When full-time teaching days were over, she did some part-time work in the schools and visited the elderly and sick in the places where she lived until she returned to Lochinvar in 1988. Here she put her energies into her much-loved greenhouse.

Sister Beatrice was an interesting person with a wide range of interests: plants, flowers, birds, cricket, works of Banjo Paterson and Henry Lawson and music of all kinds.  She followed closely the happenings of her large, extended family and loved them dearly. She was a warm-hearted, kind and generous community member and she was a prayerful person.

Sister Mary Beatrice died at Lochinvar on 29 March,1999 and after the celebration of her Funeral Mass was laid to rest in the Sisters’ section of the Lochinvar cemetery.