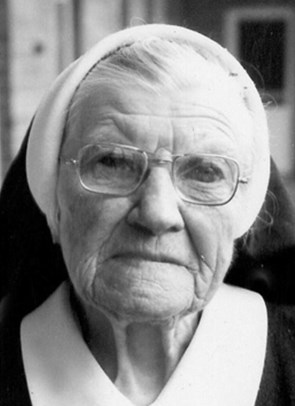 Agnes Catherine White was born on 19 October, 1891 at Moto, Cundletown.  Her father was Thomas White, a farmer and her mother was Rachel Brimstone. She was the fourth of eight children, five boys and three girls.

Agnes entered the Novitiate at St Joseph’s Lochinvar on 13 March, 1909 after a four-day journey by buggy, coach, boat and train from her family home to the place which was to be her home for the next seventy-six years.  On arrival she was given the name of Sister Mary Raymond.  She was professed on 3 January, 1912 and began her ministry first as a school teacher in Kurri Kurri, Largs, Merewether and Merriwa. Being a very capable manager saw her appointed to Boarding Schools in Wauchope, Aberdeen and Port Macquarie where she also taught in the Secondary School.

Sister Mary Raymond was an excellent cook and always approached this part of her work with enthusiasm and pride. She often spoke of the "early days" when work was truly manual and conveniences few, and would conclude with the remark "and I never regretted one minute of it.  It was what God wanted me to do."  Sister was devoted to pastoral work in the parishes where she taught, visiting the sick and bereaved whenever she could, sometimes walking long distances to help and console.  Her kindly words and prayerful presence were greatly appreciated by those in need of comfort and support.

In 1934 Sister returned to Lochinvar where she devoted her energies to caring for the Boarders for approximately the next fifty years through her work in the kitchen and their dining room.  The hundreds of girls who passed through the Boarding School in that time could testify to her diligence and her concern for them.  In those years she became a well-known identity.  Lochinvar parishioners who knew and loved her were often the recipients of her kindness, so too were visitors to the community and the college as well as the boarders’ parents and their friends.  Salesmen and tradesmen who came regularly always looked forward to meeting Sister Raymond, having a little chat with her while enjoying her scones.  All were graciously welcomed and never forgotten by Sr Raymond.

Sister Mary Raymond always retained a great love for all the members of her family and a keen interest in all that concerned them.  One of the big occasions in her life and theirs was a large family gathering at Lochinvar in 1981 to celebrate her 90th birthday.

During her last illness she displayed again the great faith for which she had always been noted. She spoke frequently of her approaching death and her longing to go to heaven. In the last few weeks as she became weaker and less able to cope, she still retained her graciousness and spirit of gratitude. On Sunday morning, 7 July, 1985 Sister Raymond died peacefully in the presence of the parish priest of Lochinvar, Father James Doran and her Sisters in religion. The Community Mass at 11.00am was offered for the repose of her soul.

After the Funeral Mass celebrated in the Convent Chapel on 10th July Sister Mary Raymond was buried in the Sisters’ section of the Lochinvar cemetery.