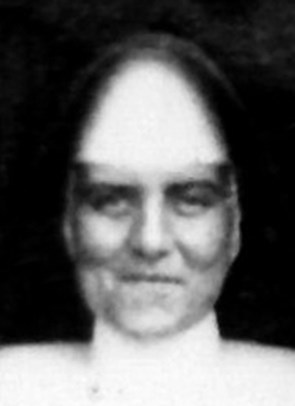 Aileen Clare was the eighth child and seventh daughter of James and Theresa O'Donnell (nee McGrorey) and was born at West Wallsend on 27th July, 1908. Blue eyed and curly haired Aileen was very bright and quick witted. She attended the local Convent School at West Wallsend till the family moved to Sydney in 1916, where she attended the Mercy School at Lavender Bay. When the family returned to West Wallsend Aileen spent two more years at the local school as well as attending night school. In 1924 she became a student at St. Aloysius, Hamilton, which necessi­tated leaving home at 7.30am and returning 7.00pm in order to get her Intermediate Certificate which she did in 1925.

On 24 May 1926, Aileen Clare became Sister Mary Damien of Our Lady Help of Chris­tians in the Novitiate at Lochinvar. She was received on the 4 January, 1927 and made her First Profession on 3 January, 1929.  After Profession she was ap­pointed to Mt St Joseph's in Cessnock then to Kurri. In 1933 she became principal of the school at Denman. In 1934 she returned to Lochinvar to prepare for final vows which she made on 1 January, 1935. Following Final Profession Sister went to Cardiff, which was her last appointment.

As a teacher Sister Mary Damien never spared herself. She had the qualities of a very fine educationalist but her promising apostolate was cut short. Her health began to cause concern in 1936 and for this reason she was sent to Merriwa and later to Mt St Jo­seph's, Cessnock. In December she went to the Mater Hospital in Waratah for a short time. On 31 December she was brought by ambulance to the Infirmary at Lochinvar and put into isolation with but six weeks to live - a victim of galloping consumption. Under the dedicated and skilful care of Sister Mary Annunciata she lived for nine months during which time she was an example of resignation, obedience and cheerfulness to all. Sister was visited during her illness by priests from the parishes in which she had worked, especially by Father Casey and Father Brennan. Dr Gardiner made many visits to his patient.

At the early age of twenty-eight Sister Mary Damien died on the 29 September, 1937, conscious to the last moment. Father Ward and the community were present at her death. Solemn Office and Requiem Mass, at which Dr. Gleeson presided, were offered for her on 30 September in the Convent Chapel before her burial in the Lochinvar Catholic Cemetery.