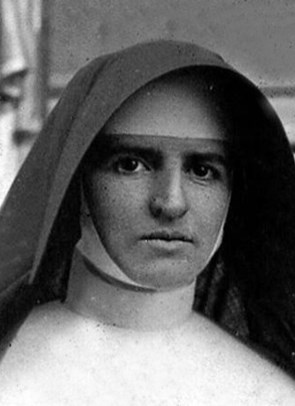 Alice Moy was born in Tinonee, near Taree on 26 January 1871 to Patrick Moy and Catherine Moore. She entered the Novitiate at Lochinvar in 1886 and was given the name of Sister Mary Brigid. Her sister Catherine (Sr M John) entered in 1892 and sadly died of consumption in 1909.

Sister Mary Brigid laboured for seventy years in charge of Convents and Schools, in Lochinvar, Brookfield, Merriwa, Carrington, Aberdeen, Charlestown, Cessnock (Mt St Joseph’s), Gloucester, Largs and Wingen, laying down the onerous task of teaching only a few weeks before her death.

Sister Mary Brigid was the Superior of the Convent at Wingen when her health became a cause of anxiety. She returned to the Mother House at Lochinvar to receive medical attention. The doctor persuaded Sister to rest for a time and advised the Mother General not to let her return to Wingen on account of the distance and the cold weather.

On 3 June Sister had a turn and as she daily grew weaker it was arranged to have her anointed in case of a stroke. On the Feast of Corpus Christi, 20 June she gave up her soul to God, surrounded by Sisters and one of her nieces, Sister Mary Louis. Her other relatives in the Community visited her prior to her death when she was still well enough to enjoy their company. She was also honoured with a visit from His Lordship Dr Toohey, who spoke very beautifully and consolingly, and thanked her for her wonderful work in the Diocese of Maitland.

The Office of the Dead was chanted by a choir of fifty priests, and the Solemn Requiem Mass was celebrated on 21 June. His Lordship presided in the sanctuary and the celebrant of the Mass was Rev. J. Quinn, with Fathers J. Brennan and Cantwell Deacon and Sub-Deacon. Rev. Fathers Flatley and B. Walsh were the Cantors.

The panegyric was preached by His Lordship, Dr. Toohey who paid high and feeling tribute to the late Sister Mary Brigid. He referred to her forebears who were remarkable for their deep faith and of the many vocations that sprang from the family.

The interment took place in the Lochinvar Cemetery immediately after Mass, the Bishop leading the cortege with the Sisters, relatives, friends and students following the remains. Among the pall-bearers were Mr W. McFadyen, Mr T. Shanahan and M. Killen.