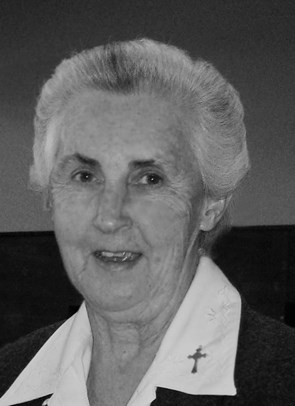 Enid Jane Myers was born at Merewether on 30 April 1935 to Henry Myers and Ethel Maud Hale. She was a member of a large family as her father was a widower with six children – William, Alice, George, Amy, Ben and Cecilia - when he married Ethel. Together they had two children, Peter and Enid. Her education for both Primary and Secondary School was at St Joseph’s, Merewether.  She was a strong, sporty girl, a netball player and a swimmer as well as being an earnest student.  Following the call to religious life, she entered the Novitiate at Lochinvar in 1952 where she was given the name Sister Mary Andrea of Our Lady of Lourdes.

After her Profession as a Sister of St Joseph on 4 January 1955, Sr Andrea began her ministry in the schools as a teacher of Infant and then Primary classes, School Principal, Boarder Mistress and later as Librarian.  She lived and worked in the Maitland-Newcastle diocese in Lochinvar, Aberdeen, Cessnock, Charlestown, Belmont, Tuncurry, Bulahdelah, Windale, Mayfield and Beresfield as well as in Port Macquarie in the Lismore Diocese and in the ACT at St Matthew’s School in Page which was a school staffed by the Sisters of the Australian- New Zealand Federation of Sisters of St Joseph.  She was capable, organised and not afraid to take on huge responsibilities, always respectful of staff and students, loyal and hard-working.

While in Canberra in 1982, Sr Andrea had a serious car accident that caused her to walk with a limp.  The effects of the accident weakened her constitution for the rest of her life. From 1999 to 2008 she was appointed to the role of Congregational Secretary, a most responsible position which she carried out graciously and with her trademark thoroughness.

Since the 1950s, Sr Andrea had been a keen student of her family history.  Research led to the story of her great-great-great-grandfather, Joseph Trimby, a convict who arrived in Sydney town with the First Fleet in 1788. She revelled in the fact that she was a member of that special group of Australians known as the First Fleeters. Some years ago she spoke at a ceremony in historic Rathluba Cemetery in the Glebe, an old part of East Maitland, where the burial site of Joseph Trimby was recognised by the First Fleet Association, the first time such recognition was given outside of the Sydney district.

Sr Andrea’s very active life came to a sudden end when she suffered a massive stroke on 30 January 2014.  Though it left her paralysed and unable to speak, her spirit remained strong and her sense of humour and gratefulness were still evident.  She was an inspiration to her family, her Josephite Sisters, the staff of St Joseph’s at Sandgate and all those who visited her.  One member of staff said, Sister Andrea has taught me so much about faith. She lives the faith.

Just prior to Christmas, Sr Andrea died on 19 December 2018 at St Joseph’s Sandgate where she had been a much-loved resident for nearly five years.  The Mass of Christian Burial was celebrated in the chapel at Sandgate on 21 December with Father Peter Street as the presider assisted by Father Kevin Corrigan.  After refreshments the funeral cortege moved to the cemetery at Lochinvar where Sr Mary Andrea Myers was laid to rest in the Sisters’ section.

Based on Words of Remembrance given by Sr Carmel Moore rsj