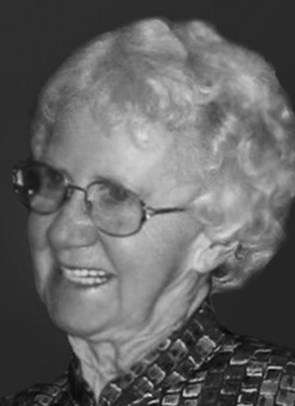 Anne Maria O’Connor, called ‘Nance’, was born at Cessnock , NSW on 7th December, 1925. She was the fifth child of Patrick and Mary Agnes (née Moore) whose O’Connor ancestors had come from Ballyancally in Ireland on The Telegraph in 1853.

One of eight children, Anne grew up helping on the farm and in the shop through the difficult years of the Great Depression. She told of happy days spent at the home of her grandparents along O’Connor Road and schooldays at the old St Joseph’s on the Hill enjoying warm friendships that endured lifelong. Secondary schooling began at the Dominican Convent in Maitland where she branched out to Commercial studies becoming proficient in Typing and Shorthand – the skills she needed in managing the family General Store.

On New Year’s Day 1945 Anne presented herself at the Novitiate at St Joseph’s Lochinvar where she joined a new family of Sisters to whom she became just as devoted. Under the kindly guidance of Mother M. Barbara the young Anne Maria, then named Sr M. Veronica grew in the quiet gentleness that was so characteristic of her. Studying for the Leaving Certificate and Teacher Training qualification during this time prepared her as a skilful Infants teacher which became her favoured role for the next sixty years, taking her from Wauchope in the north to Summer Hill in the south with many Hunter Valley stops in between.

Teaching composite classes required much preparation and skill and Anne Maria managed the multiple tasks with care and aplomb that made it seem easy. In her later years, as face to face hours in the classroom decreased she took up pastoral visitation in the parishes where she became a familiar and loved figure in many homes, hospital and hostel. Her appreciation of the priceless gift of literacy called her to continue even in her retired years to spend time passing on reading skills to children at St Patrick’s Lochinvar till she finally withdrew in 2008.

Two more busy years were spent at the parish of Cessnock where she again enjoyed the closeness of family members before coming home to Lochinvar Holy Family Wing to savour the declining years with childhood friend Sr Bernadette O’Neill. This gave her time and space to bask in the beauty of nature that she so loved and the soothing sounds of classical music that gave her much delight as well as sharing the intervals of quiet prayer that gave her wisdom of heart.

While no longer robust, Anne maintained a healthy life till very recently when a series of sudden visits to hospital became necessary. On one of those visits, it was with some shock that the Sisters learnt on Thursday, 29 November, that the end would come quickly. Her own beloved sisters, Maureen and Pat and niece, Bernadette, were quickly by her side to say their last goodbyes. Fully conscious, Anne Maria joined in the prayers of the anointing and knew that she was going home to God. She died on 29 November 2012 in the Maitland Hospital. After the celebration of her Funeral Mass in the convent chapel Sr Anne Maria was laid to rest in the Sisters’ section of the Lochinvar cemetery.