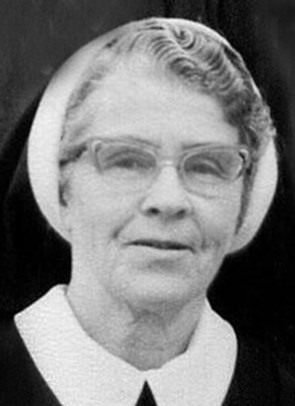 Barbara Martina Smith was born in Kearsley on 4 April 1914 to Peter Smith and Alice O’Neill and lived in Kearsley with her parents and brothers and sisters. She attended school in Cessnock. Her father, who was a butcher by trade, died when the children were very small. Her mother, a sister of Mother Mary Barbara O'Neill, was a tailoress of the first class. Because of her capabilities and circumstances she was allowed to work at home.

As the family was in great need Barbara was awarded a Lochinvar Bursary to continue her secondary studies. She would have loved to have learnt music but knew this was impossible. Barbara entered the Novitiate at Lochinvar from Cessnock on 3 June 1933 and took the name of Sister Mary Cyprian of the Sacred Heart.

Suffering was to be part of her life beginning with painful ear trouble when she was in Taree. During her years of illness it was remarked that she always had a smile on her face and made others feel better for having visited her in times of sickness. Her giving to Jesus as a Sister of St Joseph was mostly in sickness and pain but that giving was surely "gentle as silence " as one of her Novitiate companions remarked .

Little did Sister Mary Cyprian know that her active teaching days, so well prepared for in her Novitiate training, were to end so soon because of cancer. Only sixty years of age, Sister Mary Cyprian died at Lochinvar on 25 May, 1974. Her Requiem Mass took place in the Convent Chapel and her burial in the Sisters' section of the Lochinvar Cemetery.

Taken from the Words of Remembrance at her Funeral Mass