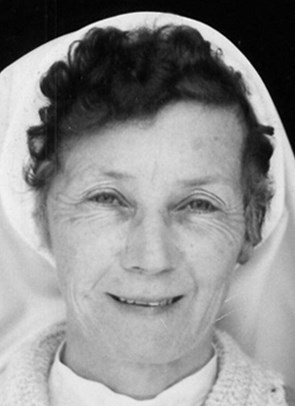 Eileen Veronica Markham was born in Maitland on 24 August 1925. She was the second of seven children of Peter Markham and Veronica Cantwell.  Her siblings were Patricia, Sheelah, Kathleen, Angela, Peter and Carmel.  Sheelah and Patricia predeceased her.

Eileen’s mother and father came from very well-known and pioneering families in the Lochinvar area. Her paternal grandmother was one of the first pupils enrolled at Lochinvar when the Sisters arrived in September 1883. Her maternal grandparents, Thomas and Jane Cantwell were well known to the early Sisters and Mother Aquin often spoke about the support they gave the Sisters. These forebears together with her great- grandparents, many uncles and aunts are buried in the Lochinvar cemetery. Eileen’s roots were deeply entwined with the pioneers of Lochinvar parish and district.

Before Eileen entered the Novitiate on 3 July, 1949 aged twenty-four, she had worked for six years as the private secretary to the manager of Galtons where she learned the secretarial skills that she later put to good use in her various ministries. Eileen was professed as Sr Mary Carmela on 2nd January, 1952.

Sister first taught Infant classes and then Primary classes in several parishes of the Maitland-Newcastle Diocese and beyond: Wauchope, Cardiff, Bulahdelah, Merewether, Shortland and Gateshead. She was Principal in Taree, Summer Hill and Clifton Gardens.

After two bouts of serious illness and years in the school, Sister Carmel completed her study in Librarianship and was appointed to Lochinvar in charge of the Resource Centre where she provided a service to many in the diocese. Her life-long love of books and reading then had her full attention and she delighted in it.

Wherever Sister Carmel lived she delighted in the role of sacristan and took great care in preparing for the celebration of the Eucharist. She loved ﬂowers and had a gift for arranging them, using her skill in beautifying the sanctuary at Lochinvar on many occasions.

With the decline in her health it became obvious that Sister Carmel needed greater care and so she became a resident at St Joseph’s Home, Sandgate.  It was there that she died peacefully at 7.45 am on Sunday, 2 November 2008.  After the celebration of her Funeral Mass she was laid to rest in the Sisters’ section of the Lochinvar cemetery near her ancestors.

Taken from the Words of Remembrance at her Funeral Mass