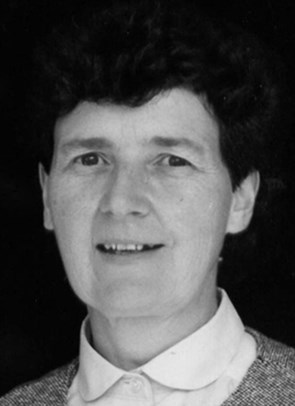 Clare Elizabeth Tobin was born on the 11th August, 1931 to Michael Tobin and Mary Florence Hickey, the youngest in a family of ten: four boys Frank, Patrick, John and Michael and six girls, Kath, Sheilah, Marie, Phoebe, Florence and Clare.

After primary school at Largs Clare came to board at St Joseph’s College Lochinvar where she excelled not only in academic studies but more so in the Music field, obtaining an LMus in piano and AMus.A in Singing and Honours in Cello.

On 1st January, 1950, along with her sister Florence, Ruth Long, Lesley Curran and Tess Connolly, Clare entered the Sisters of St Joseph Novitiate at Lochinvar. She was given the name Benignus, a name that had been held by her Aunt between 1899 and 1937.

After profession on 2nd July, 1952 she continued her training for teaching Music through the State Conservatorium of Music, Sydney, while teaching Music at St Joseph’s Lochinvar. Clare taught Music also at Taree, Merewether, and at St Anne’s Adamstown as High School Music Mistress.

In 1968 Clare studied for B.Mus, an external course from Durham University, England and in 1970-1972 pursued her Music Studies at Sydney University. In 1978 she completed a course at the Institute of Pastoral Liturgy at Clayfield, Queensland. This course fitted her for the roles she accepted in the Diocese that combined her gifts for Music and Liturgy.

Sabbatical leave saw her study at Tantur Ecumenical Institute in Jerusalem; in France with Joseph Gelineau; in England with Bernadette Farrell; in Ireland; in New York with the Liturgical Commission’s Committee of Church Music and in Canada with the Canadian Bishop’s Conference on the Sacramentary. Upon her return to Australia she was appointed as Director of Cathedral Liturgy at Hamilton.

During her retirement years she regularly visited the residents of St Joseph’s Home at Sandgate as a pastoral carer.

On 17th December, 2015 Clare passed away peacefully at Southern Cross Tenison Apartments, Swansea after being lovingly cared for in her last illness by her sister Florence and the Staff and Sisters at Swansea.  A great number of people attended her Funeral Mass in the Sacred Heart Cathedral in Hamilton before her burial in the Sisters' section of the Lochinvar cemetery.